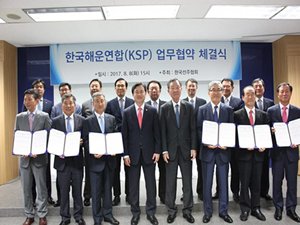 Korea Shipping Partnership, a quasi-alliance of all 14 South Korean liner operators, has extended its term by a year, even as its three years of existence failed to improve earnings.

At a meeting between the liner operators and officials from the Ministry of Oceans and Fisheries (MOF) on 28 July, the group was, reportedly, unanimously against renewing the KSP, but MOF, wanted to give it another year.

Wishing to revive the South Korean maritime industry after Hanjin Shipping was declared bankrupt in February 2017, the MOF urged the country’s remaining container shipping players to streamline their operations, resulting in KSP’s formation on 8 August 2017.

It was hoped that KSP could, within three years, eliminate duplication and drive collaboration reducing wasteful competition and improving profits.

Initially, some progress was seen when in March 2018, KSP members removed one of the 13 weekly South Korea-North Vietnam services. However, in an ominous commentary, Alphaliner stated that this made little impact as the eliminated service formed just 3.7% of total North Vietnam capacity, including services operated by non-South Korean operators.

Alphaliner had stated, “In the absence of a fully-fledged consolidation of the South Korean carriers, the KSP’s efforts will likely remain futile.”

A source from one of the KSP members told Container News, “The liner operators haven’t seen any benefits in the last three years after KSP was formed. You can say that the KSP is alive, but without actual activities.”

Besides the KSP members’ lack of determination to right-size their operations, the loose alliance was diminished by Sinokor’s acquisition of Heung-A’s container shipping business last year.

“Heung-A Shipping was the designated KSP secretary. When Heung-A Shipping sold its container operations, the KSP’s secretary had effectively left the container segment and there were opinions from the members that the position should be filled by another company.”