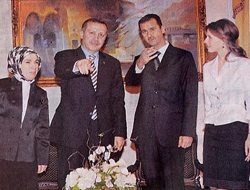 Turkey and Syria discussed ways to increase their level of the cooperation on energy and security issues, during Prime Minister Recep Tayyip Erdo?an's one-day visit to Syria.

Turkey and Syria discussed ways to increase their level of the cooperation on energy and security issues, during Prime Minister Recep Tayyip Erdo?an's one-day visit to Syria, where he has also attended to the opening ceremony of Aleppo Olympic Stadium and watched a match between Turkey's Fenerbahçe and Syria's El-Ittihad.

“I hope my visit to Syria will contribute to the establishment of stability in our region and to the development of our bilateral relations,” said Erdo?an, before flying to Damascus.

Turkey and Syria, two neighboring countries, have been able to fine-tuned their relations after having a strained relationship once Damascus withdrew support for the Kurdistan Workers' Party (PKK) in 1998.

Erdo?an and Bashar met yesterday in Damascus and had a long meeting. According to the Turkish diplomatic sources, the two leaders discussed various issues including the Arab-Israeli conflict, the situation in Lebanon, Iraq, Iran and other international problems.

Later, Erdo?an met also Syrian Prime Minister Muhammad Naji Al-Utri. The two prime ministers discussed the bilateral relations on trade, energy and security. On energy, Turkey and Syria are both involved in a project that would bring Egyptian natural gas to Turkey. Hilmi Güler, Turkey's Minister of Energy, was also in Erdo?an's delegation and had meetings with his Syrian counterpart.

“Having historical and cultural ties, Syria is an important neighbor. We have improved our relations in every area with Syria,” Erdo?an stressed.

This news is a total 668 time has been read