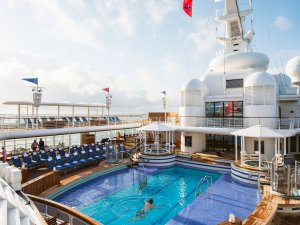 The city is one of just two English destinations to have been chosen for a visit by one of the USA’s most popular cruise lines when one of its fleet arrives in Britain next year.

The spectacular 2,700 berth cruise ship Disney Magic will call into the city’s cruise terminal on May 27 and June 12 2016. The two city visits are predicted to have an economic impact of around £500,000.

Liverpool’s Cruise Terminal manager, Angie Redhead, said: “We have been meeting with Disney Cruise Line for a few years at industry events, and in the early days their focus was on deploying ships within Florida and the Caribbean. But over time, as new ships entered their fleet, their interest in possible British Isles deployment grew.

“Working in partnership with our port colleagues in Scotland and Ireland, we were able to encourage and suggest that a British Isles itinerary would be very well received by UK cruise passengers.

“The British Isles has a wealth of world-class destinations within easy reach of our ports, with great facilities to ensure a seamless experience for each and every cruise guest.

“In discussions with Disney, I presented a broad and eclectic mix of great experiences that guests could enjoy during their time in Liverpool, ranging from cultural landmarks, fascinating heritage to spectacular countryside just a short hop away, as well as an assurance that the city of Liverpool would greet them with open arms with our famously friendly welcome when they call here.”

Ms Redhead added: “This year looks set to be another fantastic year for cruising in Liverpool with some of the world’s newest and most contemporary ships ever to sail in British waters calling here, and of course the three Cunard Queens making history on the Mersey in May.

“So it’s good to know 2016 is already looking strong, and the visit of Disney Magic will be one of the highlights of the summer. We look forward to welcoming their ships, passengers and crew and showing them everything that Liverpool has to offer.”

It also has 10 different restaurants, five pools and two nightclubs.

The announcement was made as Liverpool’s cruise season got under way yesterday evening, with Fred Olsen’s transatlantic Liverpool cruise liner Black Watch making the first of a record 14 cruises from the Pier Head this year.

This will be followed by Fred Olsen’s Boudicca on May 2, Ponant’s Le Boreal on May 5, and the Royal Princess on May 13.

This news is a total 2127 time has been read
Tags: Disney cruise, liverpool visit, Angie Redhead