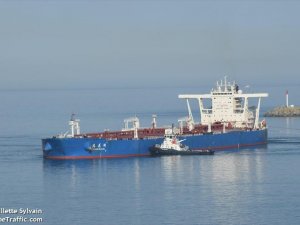 The South African Maritime Safety Authority (SAMSA) is responding to a VLCC in distress off the port of St. Johns.

The Chinese-flagged tanker, MT Yua Hua Hu, is currently at anchor in 35 meters of water with a tug attached to the stern providing a “static tow”. AMSA reports that the VLCC’s anchor is holding.

A larger tug is expected to arrive Saturday to tow the tanker to the Port of Durbin.

The incident began Tuesday when the unladen Yua Hua Hu reportedly ran aground after experiencing unidentified problems, according to SAMSA.

“The tanker is safely anchored one nautical mile off Dome Bluff on the outskirts of Port St Johns and being monitored by the MRCC. The tanker is not carrying any cargo. All 27 crew on-board the casualty vessel is reported to be safe and no injuries have been reported,’ reported SAMSA.

“SAMSA remains in direct communication with the vessel owner representatives and the master, who is providing their full cooperation to contain the threat to the South African coastline,” SAMSA added.

The vessel was reportedly sailing from China to Angola on the west coast of Africa when the incident occurred.

This news is a total 499 time has been read
Tags: grounding, south africa, vlcc