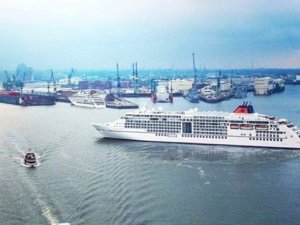 One of the concerns that have been raised is the potential environmental impact as the cruise ships sit idle for extended periods of time in the world’s ports.

Addressing that concern, Hapag-Lloyd Cruises announced that its cruise ship the Europa 2 would be cold ironing when the vessel returned to Hamburg, Germany in early May. Recently, the classification society DNV GL certified the cruise ship’s connection, signifying the first time that a cruise ship has used a cold ironing connection for an extended period of time

According to Hapag-Lloyd Cruises, the Europa 2 has been successfully using cold ironing at the Cruise Center Altona in Hamburg for the past 30 days and was able to save a total of 600 tons of carbon dioxide. To achieve this required the Hamburg Port Authority to adjust the connection as the Europa 2 requires a lower voltage than the other cruise ships that are employing cold ironing in the port.

The Europa 2 requires 2.2 megawatts of power per hour during its lay time. The electricity used is being supplied by Hamburg Energie and comes from 100 percent renewable resources, which means that the operation of the Europa 2 in the port has been practically climate-neutral. By using the cold iron connection, the ship’s emissions were reduced to practically zero.

“We are glad that we have been able to make such valuable use of this forced break by driving forward cold ironing and the certification of the Europa 2. The fact that a cruise ship has used cold ironing over a long period of time in Hamburg is an important and unprecedented experience,” says Karl J. Pojer, CEO of Hapag-Lloyd Cruises.

Hapag noted that the use of cold ironing is part of its overall environmental strategy, which also includes using marine gas oil with a low 0.1% sulfur content for its entire fleet of cruise ships. By using the marine gas oil, Hapag-Lloyd Cruises says its fleet will be cut sulfur emission by 80 percent. The switch to marine gas oil also means a reduction in soot and particulates of up to 30 percent.

Hapag said that when it resumes cruising all of its routes are carefully planned with an environmentally efficient average speed not pushing the vessels to go as fast as possible, thereby reducing fuel consumption by 30 percent and further lowering the emissions.

This news is a total 1480 time has been read
Tags: DNV Certifies First Extended Use of Cold Ironing by Cruise Ship