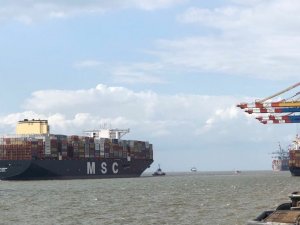 DNV GL has launched a new container ship fire notation, with the MSC Gülsün series of 24,000-TEU ships the first vessels to receive it

DNV GL already has a class notation F for additional fire safety which addresses all types of ships, but FCS is a new notation that targets only container ships.

The FCS container ship fire notation has five levels. The five qualifiers are modular but do not fully build upon each other (a vessel could have qualifier FF without having FD).

The DNV GL FCS class notation has been awarded to MSC Gülsün class – the largest container ships in the world. DNV GL said "MSC and DNV GL are leading the industry to a new safety standard preventing fires."

The notation for the MSC Gülsün-class includes: a HAZID workshop carried out; equipped with on-deck fixed fire fighting monitors and fire fighting under-deck by cargo hold flooding. A further innovation is an on-deck thermal camera detection system on board MSC Febe.

The notation can be applied for newbuildings and ships in operation.

DNV GL said “We consider it important that any measures we introduce to tackle fire safety on container ships are suitable to be adapted for operating ships.”

It gave more details of retrofits: