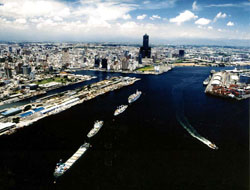 The loading and unloading volumes as well as traffic of ships at Kaohsiung Harbor, Taiwan's largest port, have still failed to pick up.

The loading and unloading volumes as well as traffic of ships at Kaohsiung Harbor, Taiwan's largest port, have still failed to pick up.

Since direct cross-strait shipping links were officially inaugurated on Dec. 15, 2008, the loading and unloading volumes as well as traffic of ships at Kaohsiung Harbor, Taiwan's largest port, have still failed to pick up due to the adverse impacts of global financial tsunami, according to the Kaohsiung Dock Workers Union. Shih Yung-lin, chairman of the union, said that the lingering global economic recession has seriously undermined the business of operators of cargo loading and unloading transportation, shipping agency, cargo handling, and customs clearance brokerage, since there have been few ships entering and operating at the dockyards.

?Some 10 to 20 years ago, the dockyards used to be crowded with ships, but now they are usually empty, even after the direct marine transportation link across the Taiwan Strait,? Shih said.

Dock workers are plagued the most by the sluggish shipping operations, according to Shih. There are around 3,000 such workers at the Kaohsiung port, and up to 2,000 of them are without regular employers and are paid on a daily basis. ?No ship, no work. And some workers are forced to rest for 20 days a month and thus earn less than NT$10,000 as a result, lower than earned by foreign workers in Taiwan,? Shih lamented.

A veteran truck service provider also complained of poor transportation business at the Kaohsiung port. ?For three months in a row, we haven't had any transportation orders from shipping firms, and we have no other choice but to reduce our workforce,? the provider said.

Lee Kun-der, a managing director of the Kaohsiung customs clearance brokerage association, said that the direct cross-strait transportation links have benefited mainland China only, and the Kaohsiung port has yet to see its business operations rebound at all.

In addition, some cargo loading and unloading service providers have also rushed to cut their workforce or slash monthly pay for employees.

On another front, direct flights between Kaohsiung and Shanghai, operated by China Airlines, have recorded almost 100 percent passenger occupation rate since they were officially inaugurated on mid-December 2008, while those between Kaohsiung and Hangzhou, operated by TransAsia Airways have also sustained a passenger occupation rate of over 60 percent.

However, over 90 percent of the flight passengers are Taiwanese people, and most travel agencies and tourist service providers are quite disappointed about the low number of tourist groups from mainland China.

In related news, Taiwan's exports of agricultural products to mainland China in the first 11 months of 2008 exceeded US$400 million, representing an annual increase of 4 percent, and the island's agricultural imports from China came to US$660 million. As a result, the agricultural trade surplus in favor of China has declined significantly.

This news is a total 1007 time has been read