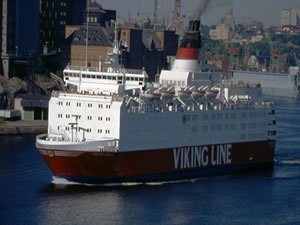 The tragic sinking of the ro/pax cruise ferry MS Estonia in 1995 is well known, and it is commonly used as a case study in maritime training programs.

The Estonia's bow door visor failed in bad weather, leading to rapid flooding and foundering, according to the long-established account of the casualty.

However, new evidence uncovered by a team of documentary filmmakers indicates that the official report may not represent the actual course of events.

Their ROV video footage shows a 12-foot by three-foot hole in Estonia's hull on the starboard side - a massive breach never previously reported.

On the night of September 27, 1994, the ferry Estonia got under way from Tallinn to Stockholm on a scheduled run.

The weather was typically rough for the Baltic, with winds of up to 40 knots and waves of up to 20 feet.

At about 0055 hours the next morning, passengers heard a loud bang. 15 minutes later, the vessel's bow visor came loose, leading to flooding on her vehicle decks.

She rapidly listed to starboard, reaching 60 degrees over the course of the next 15 minutes. At 0150, she slipped below, listing at 90 degrees and sinking by the stern.

Only 137 out of nearly 1,000 people on board survived. In a joint after-accident report, investigators zeroed in on the bow visor closing mechanism.

They concluded that its locking pin system was underbuilt and broke free from pounding action as the Estonia made way, allowing the visor to come loose and water to flood in rapidly (official video illustration above).

This account did not incorporate a major hull breach on the starboard side, like the documentary's new ROV footage appears to suggest.

“We are just putting facts on the table. But for 26 years now, they have said that what we have found did not exist," said documentary filmmaker Henrik Evertsson, speaking to The Guardian.

"The surviving witnesses – whose testimony really didn’t feature in the report – were clear that it all started with [a] bang. It was a bang that people felt, not just that they heard.

And the ship went down so incredibly fast." Evertsson's team visited the wreck site despite a joint treaty prohibiting its exploration:

The year after the sinking, eight nations signed an agreement to ban further examination of the wreckage, designating it a protected underwater tomb.

The Swedish Democrats party has called for lifting this ban so that a re-examination of the circumstances of the sinking can move forward.

This news is a total 1870 time has been read
Tags: Documentary Unveils New Evidence in Tragic Sinking of MS Estonia