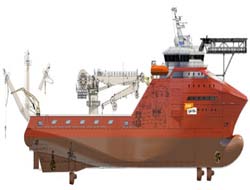 DOF Installer ASA has exercised an option with Aker Yards for the construction and delivery of an additional new high-end subsea installation and construction anchor handling vessels.

DOF Installer ASA has exercised an option with Aker Yards for the construction and delivery of an additional new high-end subsea installation and construction anchor handling vessels. This is one of two options that DOF Installer was granted in February 2007. The second option has been extended to October 2007.

The vessel will be built at Aker Yards (Aukra, Norway) with delivery scheduled for October 2010 and is of Aker AH 04 CD design, developed by Aker Yards Project.

The vessel will have a length of 108 m, beam of 24 m and depth to main deck of 9.8 m. It vessel will be equipped with 500 metric tonnes main winch, and a large offshore crane.

Accommodations are planned for 90 persons.

The hull for the vessel will be built at Aker Yards, Tulcea in Romania and it will be outfitted at Aker Yards in Norway.

Aker Yards says the value of the contract is approximately NOK 760 million (about $131 million).

Based on the private placement price, the post-issue market cap of DOF Installer is NOK 730 million. The subscription period for the contemplated private placement will commence immediately and last until 08:30 on 6 July 2007 the latest. However, DOF Installer reserves the right to end the subscription period at an earlier stage at its sole discretion.

ABG Sundal Collier Norge ASA and SEB Enskilda ASA have been retained as financial advisors in relation to the private Placement.

This news is a total 665 time has been read