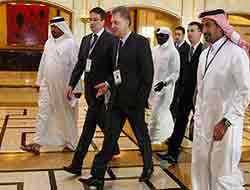 As the two-day conference bringing together officials from the world's gas producing countries in Qatar's capital Doha rounds up today...

As the two-day conference bringing together officials from the world's gas producing countries in Qatar's capital Doha rounds up today, importing countries will be relieved to hear that plans to set up an OPEC-style cartel for gas have not gone ahead at the 16-member Gas Exporting Countries Forum (GECF).

Energy ministers from Iran and Qatar denied that the world's largest natural gas exporting countries intend to band together as a cartel. Discussions at the 16-member Gas Producing Countries Forum focused on deepening cooperation between gas producing countries with an aim instead to create a stable world market for the fuel, The Associated Press reported.

"I hate the name cartel. We are not a cartel," the Qatari Minister of Petroleum Abdullah al-Attiyah told reporters on the sideline of the meeting. "The cartel is not an issue. We're here to exchange views on technical issues and on the markets," said Iran's Minister of Petroleum Seyed Hamaneh.

Significantly, Russia flew in a mixed delegation of doves and hawks into Doha. On the one hand was Industry and Energy Minister Viktor Khristenko, who argued against signing any documents providing a legal basis for the cartel's creation, as this would attract criticism from the United States. On the other was the head of Gazprom Export (a branch of Russian state-controlled giant Gazprom) Alexander Medvedev, who argued in favor of the cartel, reported Russian business newspaper Kommersant.

Gazprom is interested in putting pressure on the EU through the CECF's executive bureau, as the 27 country bloc plans to liberalize its gas markets, diversify its sources, and decrease its 44 percent dependence on Russian natural gas.

European Union leaders have already discussed potential responses aimed at opposing the emergence of a producer's group that would coordinate output and control prices.

Many experts say a gas cartel that resembles the Organization of Petroleum Exporting Countries group would be tough to achieve, since most gas is sold under tight contracts that allow buyers to lock in prices for up to 25 years. Gas prices do not fluctuate with the same rapidity as those of oil.

Besides, a gas cartel could not coordinate prices directly, unlike OPEC: the larger part both of liquefied gas and of “pipeline” gas is being supplied under long-term contracts, making it impossible to coordinate prices.

Out of 2.75 trillion cubic meters of gas consumed by the world in 2005, the share of liquefied natural gas was just 6.9 percent. According to the International Energy Agency's forecast, the world demand for liquefied gas will increase up to 476 billion by 2010 or up to 10-12 percent on the international gas market.

That said, the idea to coordinate prices in new pipeline and liquid-gas projects of the GECF is more feasible. It will allow Russia, Qatar, and other GECF members? to make investors and consumers in new projects pay higher prices for gas.

Experts say that there is a lot of political rhetoric behind these moves. Talk of a cartel first arose in January, when Iran's supreme leader Ayatollah Ali Khamenei proposed that Iran and Russia create one - and at first the idea seemed to gain favor among producers. Russian President Vladimir Putin and Qatar's emir agreed to explore the idea. President Abdelaziz Bouteflika of Algeria and President Hugo Chavez of Venezuela are also known to support the creation of a cartel.

Russia, an OPEC in its own right:

“Russia receives Turkmen, Uzbek and to some extent Kazak gas at very low prices. Russia is a gas OPEC in its own right, and it is the dominant partner. It is able to buy Central Asian gas for around $100 per 1,000 cubic meters, and to sell at around $300, and therefore has no economic reason to join Iran,” said Necdet Pamir, general coordinator of the Center for Eurasian Strategic Research in Ankara.

Russia holds 27 percent of the world's known, recoverable reserves. It signed a 25-year contract with Turkmenistan for 80 bcm (billion cubic meters) of gas per year in April 2003 – a huge amount, considering that Turkey's yearly consumption for 2006 was about 30.8 bcm. It also imports 18 bcm of Uzbek gas per year, and 8 bcm of Khazak gas.

Iran holds 15 percent of the world's natural gas reserves, yet desperately needs Western investment to develop its gas potential further because it consumes all of the 90 bcm per year that it produces (the gas it exports to Turkey is from Turkmenistan). Political issues and the nuclear standoff with the West make this investment and growth impossible at the moment.

Qatar, which also has roughly 15 percent of the world's known natural gas reserves, may on the other hand feel nervous about hitching itself to a “gas OPEC” with Russia and Iran, which are unpopular with the West, based on the large amounts of foreign investment it has succeeded in attracting. John Roberts, Caspian specialist for Platts, an independent energy information source, said that Qatar, unlike Russia, is also deemed “transparent” by Western investors, who complain about the monopolistic practices of Russian state-controlled Gazprom. Qatar may, however, use the prospect of a cartel as a threat in trying to re-negotiate production sharing agreements and concessions with major investors, said Necdet Pamir. “If you are OPEC you have 10 or 11 countries that when they cooperate they are roughly cooperating on the same playing field. If Russia chooses this model, they would have to ensure equal conditions for their Central Asian partners,” said Roberts.

There is no doubt, however, that if a cartel were to be established, gas prices would increase. It is also likely that Khristenko objected to any document being signed in order to keep the prospect of an effective gas cartel as a card for the future.

This news is a total 1068 time has been read