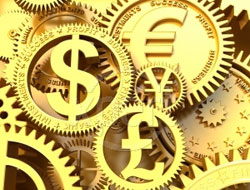 General Motors and Citigroup could be catalysts for more dollar strength

The US dollar looks set to maintain its positive momentum

The US dollar looks set to maintain its positive momentum in the week ahead as financial market turbulence and global recession fears keep funds flowing back from riskier regions. Perhaps ironically, even the uncertainty hanging over US corporate icons General Motors and Citigroup could be catalysts for more dollar strength as investor anxiety about their fate feeds demand for safe-haven US Treasury debt.
More broadly, flows in global equities will likely continue to drive trade in the foreign exchange market.

The dollar has benefited tremendously in recent weeks as falling stocks prompted US investors to bring money home and others to flock to the relative safety of Treasuries.

Barring an unexpected setback for the greenback, it appears set to notch its fifth straight monthly advance against most currencies except the yen, the other big beneficiary of safehaven and repatriation flows.

The euro fell against the dollar and the yen, as a stream of evidence that the global economy is continuing to suffer kept demand intact for unwinding risky positions in favour of low-yielding currencies.
Weak European stocks kept investors wary of risk.
Investors will receive more confirmation of a slowdown in the United States next week when the government releases its second estimate of third-quarter gross domestic product on Tuesday.

Economists are expecting the economy to contract 0.5 per cent, down from a previously estimated 0.3 per cent fall.

The yen slipped against the dollar and euro at the onset, as a rise in Tokyo stocks reduced fear-driven demand for the Japanese currency, which had served as a safe haven amid disappointment over the Group of 20 financial summit.

Investors had initially turned more risk averse after the weekend meeting of the G20 major economies failed to produce concrete measures to avert a global downturn.

The yen was also hurt by data showing Japan slid into recession in the third quarter along with the euro zone economy.

Sterling has slipped 25 per cent against the US unit this year, hitting a six-and-a-half-year low around $1.45 last week, when it also hit a record low against the euro of 86.62 pence.

By some measures, sterling's recent slide is even greater than the fall in late 1992 when it was ejected from the euro group of currencies, but the chances of a repeat rescue attempt from the Bank of England are minimal.

Sterling has tumbled 16 per cent against the dollar so far this quarter.

Implied volatility on one-month sterling/dollar currency options shot up to nearly 30 per cent earlier this month, eclipsing a jump to 22 per cent in October 1992.

Sterling traded around $1.49 against the dollar on Friday.

Analysts say authorities are willing to see sterling weaken towards a fair value range of $1.40-$1.50.

This news is a total 996 time has been read