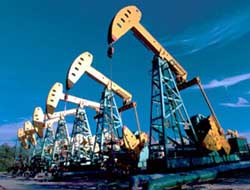 Small oil companies in Tatarstan say they will stop producing on December 1.

Small oil companies in Tatarstan, which account for about 6 million of the 20 million tons of the oil independently produced in Russia, say they will stop producing on December 1. Selling oil has become unprofitable for them, and they have no storage facilities. Therefore, they are asking to be exempted from the mineral use tax from December 1 until the domestic price of oil rises to $25 per barrel (about 5000 rubles per ton) and to halve the export duty for them. Rauf Shagaleev, head of OAO Bulgar Neft in Tatarstan said that the companies have prepared an appeal to be sent to the president, government, State Duma and Federation Council. The message is being circulated for signing at the moment.

Small oil companies do not have their own refining facilities

Therefore, according to Valiev, small oil companies have stopped selling oil this month, and they will run out of storage capacity by December 1. ?Well will have to be closed down. That will mean laying off employees,? Valiev observed. Observers say the situation is similar throughout Russia, with falling production noted among independent oil companies in the Komi and Khanty-Mansi Autonomous Areas and Tomsk Region as well.

This news is a total 1141 time has been read