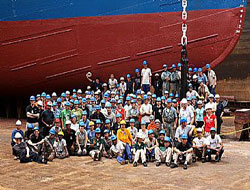 Volunteers in dry dock after work finished on refurbishment.

She's the oldest ocean-going passenger ship in active service, built in the same year as the beginning of the Great War, she has visited over 100 countries and drawn admiration from almost 20 million visitors.

Just out of dry-dock in Singapore, she is resplendant in fresh paint and ready for another year's service around the globe. But it could number amongst her last.

Built in 1914, the mv DOULOS faces an uncertain future. New SOLAS regulations which come into force in 2010 have already signalled the death-knell for many elderly passenger ships and the DOULOS can be no exception.

The ship started life as a US freighter, the MEDINA, and was converted into a passenger vessel in 1949. Briefly employed as a pilgrim ship she went on to undertake cruises right up until 1977 when she was sold and the following year began the role she is now famous for, as a floating library.

Having many flammable materials in her fittings, especially wood panels and decks, she would need to undergo a 'prohibitive' refit to ensure she passed the new safety at sea regulations. Her current owners, the German charity Good Books for All, are desperate to either find funds to undertake the work necessary or find a buyer to save her the ignominy of going to the scrapyard.

If her owners cannot raise the cash, she will be decommissioned in 2010 and in all likelihood may find a home at some European port as a floating restuarant.

This would be a sad role for a ship that has travelled to many ports and is a living reminder of not one but many eras of shipping history. Having sailed through two world wars, the Great Depression, carried pilgrims, tourists, and been a luxury cruise ship, she is an embodiement of adaptation and survival.

Should she be taken off the world's seas, it is doubtful if the world will ever see a ship quite like her in active service again.