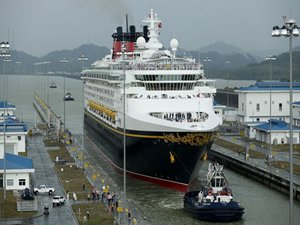 Big Oil knows a thing or two about evacuation procedures.

Working from proven technology in regular use in the offshore oil and gas industry, Viking Life-Saving Equipment has developed a new marine evacuation system (MES) that has already been snapped up for several newbuilds, Passenger Ship Technology can reveal.

Essentially, the system called Viking Veds is a response to the fast-growing trend for more adventurous cruises into ice-thick waters where lifeboat systems can be all too easily be damaged.

But also, as cruise ships get ever bigger, Viking’s breakthrough is designed to get the evacuation systems safely through confined spaces like the Panama Canal and ports.

“There is a huge risk of damaging them in these confined places. No one has had a solution to these issues, but why live with them when you do not have to?” Viking vice-president of sales, cruise and LifeCraft Niels Fraende tells PST. “Sometimes crews even have to take half the MES systems off the ship when they pass through the Panama Canal to avoid pierside damage.” By having no parts mounted on the side of the hull, Viking has been able to greatly reduce any risk of damage to the evacuation system.

The Denmark-based safety solutions group has also dramatically reduced the amount of maintenance and servicing required by keeping the system simple. As a bonus, Viking also claims the system is not as vulnerable to harsh weather conditions as it is fully encased in a protective shell when not deployed.

The offshore industry with its towering infrastructure adopted the principles of the system around 20 years ago. Liferafts can be lowered over 80 m from a drilling rig and still be kept in position by means of a submerged sledge that acts as a counterweight.

Combined, these add up to compelling arguments for the cruise and passenger industry. Unsurprisingly, demonstrations of the prototype have already proved sufficiently convincing that cruise operators and shipyards are incorporating the system in new designs, the first of which should hit the water in late 2022.

But how exactly does Viking’s new solution work? Aiming for technical simplicity, there is no welding on shipside. A fully enclosed corrosion-free casing protects the system from the marine environment. The service interval on the liferafts is extended to 30 months.

Viking has also refined the twin evacuation slides on the system using a highly flexible technology that controls the rate of descent of evacuees by letting them pass through the slide in a spiral motion. An electronic counting system adds up the number of evacuees, a much more reliable method than a manual head count. The system also supports evacuees regardless of their age and condition by catering for children, disabled people and those on stretchers.

The launch system, probably the most attractive element of the solution, requires the minimum amount of handling by crew, with the launch itself reduced to a two-stage handle pull with no subsequent bowsing required on shipside. Once the system is inflated and the chute leader in place in the first liferaft, evacuation can start. Launch is achieved entirely by gravity without using hydraulics. Supported by a winch, the sledge on which the liferafts are stored push the slides towards the waterline. They then inflate on hitting the water while the sledge continues below the surface where it settles in position and acts as a means of stability and bowsing. This also ensures the system is flexibly effective under adverse list and trim conditions.

The new evacuation system has a launched capacity with three liferafts of 459 and a maximum capacity of 918 people. Using additional drop rafts, everybody can be evacuated within 30 minutes.

As Viking’s seeming breakthrough demonstrates, the demands of cruise ships continue to spur innovation as vessels’ complements get constantly bigger. Servitech’s Seahaven system, for example, targets larger vessels with multiple slides that channel passengers into inflatable lifeboats. Deployable in less than four minutes because of the absence of conventional davits, each lifeboat can accommodate 530 people, or 160 side-by-side.

And from Tasmania, Liferaft Systems Australia (LSA) has booked a run of substantial contracts, the latest for five vessels under construction around the world, for its slide evacuation systems and life rafts. “All of the MES and large-capacity life rafts will be designed and built at our Hobart facility for delivery in 2021, 2022 and 2023,” managing director Mike Grainger said in July. On top of these latest contracts valued at nearly A$5M (US$3.63M), LSA’s orderbook is full for the next three years with contracts for ferries, navy ships and superyachts, and more to come. “We are in the final stages of negotiation for some very significant contracts for delivery through to 2030 and beyond,” business manager Molly Grainger tells PST.

The company has built its success on simplicity by sticking to a design ethos that marine evacuation systems should not be complicated. “The current LSA systems are proven technology as opposed to new technology,” LSA UK-based sales and marketing executive Peter Rea tells PST. “We continually seek to make improvements to the product, but the inherent design is what was originally designed in the early 1990s.”

Like competing systems, LSA’s is pursuing efficiency. “Our systems are simple to use for passengers and crew. It is simple to deploy from either the bridge or locally at the MES station by one person,” adds Mr Rea. “Once deployed there is no further intervention by crew to enable the evacuation to begin. And because the system is inclined slide-based, all passengers regardless of age or physical ability can be safely and rapidly evacuated.”

Clearly one of the attractions of the LSA MES is the absence of complicated mechanical or manual winch arrangements, complex hydraulics with their inherent maintenance challenges, and the fact they are not connected to the ships main auxiliary power. And finally, the systems are relatively easy to install and crucially, remove for annual service and maintenance.

Another tried and true system is Servitech’s Marin Ark 2 unit. The 100th to be installed, the unit is at work on Stena Line’s new E-Flexer class of ropax vessel that entered service in mid-January on the Irish Sea between Dublin and Holyhead. The largest of Servitech’s products, Marin Ark 2 is designed to evacuate 860 people in less than 30 minutes.

Italy’s Navim group continues to find a market for its relatively conventional systems. Launched in early 2020 from the Fincantieri yard, Seven Seas Splendor is equipped with Navim’s evacuation system. It features lifeboats, tenders, rescue boats with telescopic davits that are, in a nod to the age of battery power, equipped with electric winches.

Describing the obligatory muster drill as “one of the least-loved but most important parts of a cruise vacation”, Royal Caribbean has reinvented this chore with the aid of digital technology. Instead of the time-honoured assembly of thousands of passengers milling around the lifeboats waiting to be briefed, they will receive instructions through their mobile devices and the cabin’s television before setting sail. They will however be required to complete the drill by visiting their assigned assembly station where a crew member will verify that all the necessary steps have been completed and answer any questions.

Dubbed Muster 2.0, the new drill was first tested on Symphony of the Seas in January 2020. The process is “an elegant solution to an outdated, unpopular process,” says Royal Caribbean chief executive Richard Fain, pointing out that it will also save guests time and allow the ship to operate without having to stop. According to Royal Caribbean’s research, Muster 2.0 is the first meaningful change to the safety drill in a decade, in fact since life jackets were moved from guest cabins to muster stations. First practiced on Oasis of the Seas, that initiative was widely followed throughout the industry and Royal Caribbean hopes this latest innovation will be adopted in the same way.

Although evacuation systems have been pressed into service several times recently on non-passenger vessels, this has rarely been the case since the Costa Concordia sank on 13 January 2012. According to the subsequent enquiry into that event, the evacuation verged on panic with some lifeboats launched by crew, reacting to a fast-deteriorating situation before an official order was given, while others were never launched at all in the absence of clear direction from the bridge. In the general chaos helicopters were deployed to airlift passengers while others were taken off by volunteer motorboats. The final death toll was 33 out of the total complement of 4,252 passengers and crew.

Similarly, the most recent evacuation – from Viking Sky in March 2019 off the coast of Norway – was conducted by helicopter rather than by lifeboat or liferaft. The seas at the time were big, with waves as high as 6-8 m whipped along by strong winds. In total 479 people were helicoptered off the ship out of 1,300 passengers and crew before the vessel was able to restore power and sail into Molde harbour accompanied by two supply ships and a tug. According to the Norwegian Maritime Authority’s investigation, the vessel lost power because of low oil pressure.

Perhaps the most critical element of evacuating passengers takes place before they get into the survival craft. International Maritime Organisation’s regulations recommend that all passengers should be off the ship within 60 to 80 minutes, including the time taken by passengers and crew to assemble at their muster station from the sound of the first alarm.

The recommended deadlines are 60 minutes for ships with no more than three main vertical fire zones and 80 minutes for vessels with more than three. But the way passengers move through the ship to the muster stations is fundamental to hitting those targets, for instance by eliminating areas of congestion. As the Royal Institution of Architects (Rina) has pointed out in an analysis of IMO’s guidelines, they specify that a minimum of four scenarios are considered including day and night-time evacuations. As the institution explains, the evacuation process is necessarily much more complex on a ship than it is from a building on land from which the early data for shipboard evacuation was derived.

“Passengers may have to return to their cabins to collect life jackets before heading for a pre-defined assembly station. They also face possible additional hazards due to weather exposure, vessel motion or even increasing vessel trim or list,” Rina explains.