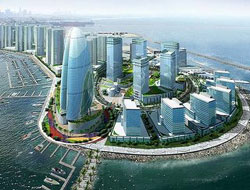 Dubai Ports World (DP World) plans to commission its Saigon Premier Container Terminal in Nha Be District in September, so Ho Chi Minh City should speed up work on infrastructure projects there. Anil Wats, DP World executive vice president and chief operating officer, told city chairman Le Hoang Quan at the city hall that he was interested in the progress of dredging the Soai Rap River, and developing North-South Highway and other roads leading to the terminal.

As for the 60km Soai Rap River, Quan said the city was dredging this river to facilitate the passage of ships to deep-water ports in Hiep Phuoc Urban Port Complex in Nha Be District, including the terminal of DP World.

However, the Soai Rap River has three 2km stretches which are only five meters deep, obstructing the passage of large ships. ?Hiep Phuoc will not be able to become a modern port town if its ports cannot receive giant vessels, while the Long Tau River is too narrow,? said Phan Hong Quan, general director of the Tan Thuan Industrial Promotion Corporation (IPC), DP World"s local partner in the Saigon Premier Container Terminal project.

?We started dredging the Soai Rap River in 2007. The first 10,000-DWT vessel entered Hiep Phuoc Port in January last year. But we are still dredging it at the moment,? he said.

With DP World"s financial support, IPC plans to dredge the river to ensure the average depth of 11 to 12 meters. With such a depth, Hiep Phuoc deep-water ports will be able to receive container ships of 30,000-DWT or even 50,000 DWT.

For the roads, both North-South Highway and Hiep Phuoc"s road networks are not good. City chairman Quan said the city government would invest more to solve this problem.

In the first phase with 24 hectares needed, this container port will have a handling capacity of 800,000 TEUs a year, and this figure will rise to 1.5 million TEUs in the second phase.

This news is a total 935 time has been read