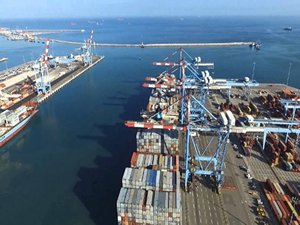 DP World and Dubai Customs signed a series of memorandums of understanding (MoUs) with an Israeli company called DoverTower, which has broad investments, including co-ownership of Israel Shipyards in Haifa and the Port of Eilat located on the Red Sea.

Just a month after the news of a peace deal between Israel and the United Arab Emirates and the same day Israel, Bahrain and the UAE formalized their agreements, the first potential peace dividend appears.

DP World and Dubai Customs signed a series of memorandums of understanding (MoUs) with an Israeli company called DoverTower, which has broad investments, including co-ownership of Israel Shipyards in Haifa and the Port of Eilat located on the Red Sea.

The agreements are seen as first step to develop ports, free trade zones and an enhanced trade infrastructure.

The companies said they would continue to explore opportunities to develop trade links between Israel and Dubai.

One of the specific first initiatives announced by DoverTower is a plan to collaborate on a joint venture that will bid for the privatization of the Port of Haifa in northern Israel.

"The MoUs will contribute to the efforts to tap economic and trade cooperation opportunities, and facilitate development-oriented linkages between the two countries,” said His Excellency Sultan Ahmed bin Sulayem, Chairman and CEO of DP World, in the prepared statement released after the singing of the MoUs.

“DP World's mission is to enable global trade, our work to build trade routes between the UAE, Israel and beyond will help our customers to do business in the region more easily and efficiently."

According to the companies, the MoUs create a framework to work together in assessing opportunities to develop infrastructure for trade between Israel and the UAE, as well as within Israel and the region.

DP World will assess the development of Israeli ports and free zones and the potential establishment of a direct shipping route between Eilat and Jebel Ali,

Dubai Customs will promote and facilitate trade between private entities in the two countries through customs best practice and seamless, innovative processes, and

Drydocks World will explore business opportunities with Israel Shipyards on a joint venture for developing, manufacturing and marketing ISL products.

"I believe that this agreement is just the beginning of mutual and long collaboration and more agreements will follow between DP World and DoverTower across different industries,” the statement quoted Shlomi Fogel, who is the owner of DoverTower Group, shareholder of Israel Shipyard port in Haifa and partner of Eilat Port. "This is a great honor to work and collaborate with HE Sultan bin Sulayem.

I'm proud of our mutual friendship and vision to create a strategic partnership that will positively impact the global trade and economy while strengthening the commercial relationship between the state of Israel and the United Arab Emirates.”

Israel has been working to modernize its ports through privatization efforts.

The country previously made an agreement with China’s Shanghai International Port Group to develop a new terminal due to open in 2021 in Haifa.

Israel’s Globes news outlet reports that Fogel, who has broad business investments, also has developed extensive relationships in the Arab world and has been pushing forward to leverage the newly announced agreements with Dubai and the UAE.

Fogel also wants to establish sea trading routes between Israel and the UAE.

This news is a total 2764 time has been read
Tags: DP World Announces Agreements in Israel Under New Peace Deal