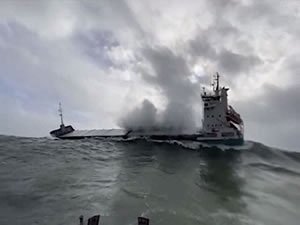 Three rescue boats with Royal National Lifeboat Institution came to the rescue of a cargo ship that had lost power and was in danger of hitting rocks in southeast Ireland on Tuesday.

The ship, the 4,000-tonne Lily B with nine crew members on board, was carrying coal when it lost power and came within half a nautical miles at Hook Head in Wexford, Ireland.

The Irish Coast Guard received a distress call from the vessel around 3 p.m. local time Tuesday.

The Coast Guard requested the help lifeboats from Dunmore East, Kilmore Quay and Rosslare to the assist the vessel until a tug could arrive. Conditions at the time were reported to be force eight with waves of over six meters.

The RNLI lifeboats from Dunmore East and Kilmore Quay were able to establish tow lines with the vessel, helping keep the cargo ship away shore as the lifeboat from Rosslare stood by.

Some dramatic video shows the conditions the RNLI lifeboats faced as they battled to keep the vessel off the rocks.

The tug arrived on scene and was able establish its own tow line to the vessel around 5:40 p.m.

The Lily B was eventually towed to calmer waters in Waterford Harbour early Wednesday morning. “If it wasn’t for the work of the three lifeboat crews out in force eight conditions I fear the vessel would have hit the rocks and there could have been a serious loss of life,” said Rosslare RNLI Lifeboat Operations Manager David Maloney.

“The 4,000-tonne vessel came within a half a mile of the shore and Dunmore East and Kilmore Quay lifeboat crews had an incredibly difficult job in keeping it away from the rocks.

“The seas were huge, and it would not have been pleasant for anyone out there in those conditions.

The lifeboat crews were out for over twelve hours in a callout that involved serious skill and concentration and I am tremendously proud of all three lifeboat crews involved.

Thankfully we did not have a tragedy today,” Maloney added. Master of Italian container ship diedThe ship was banned from entering Singapore, because the rumor was, he died from covid. Indonesian Navy KRI NANGGALA 402 sank with all handsSubmarine sank with all 53 crew on board, there was no chance of survival taking into account wreck site depth, which is far exceeding submarine's dive depth. Fire extinguished on oil tanker off Syria after suspected drone attack ,UPDATEThe coastal town of Baniyas houses a refinery, which along with another in Homs, covers a significant part of Syrian demand for diesel, heating fuel, gasoline and other petroleum products, according to industry experts.