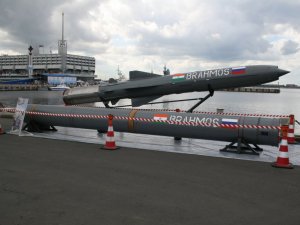 BrahMos medium-range supersonic missile is a major force multiplier on the battlefield with impeccable multi-role and multi-platform (ships, aircraft or land) launch capabilities.

The BrahMos missile with pinpoint accuracy can be launched as far as 290 km from the target in either inclined or verticle configuration based on the type of the ship or user requirements.

In September this year, the missile featuring Indian propulsion system, airframe, power supply, and other major indigenous components, was successfully test-fired from ITR, Chandipur in Odisha.

In May this year, the IAF successfully fired the BrahMos air version missile from its frontline Su-30 MKI fighter aircraft. The IAF became the first Air Force in the world to have successfully fired an air-launched 2.8 Mach surface attack missile of this category on a sea target on November 22, 2017.

This news is a total 543 time has been read
Tags: DRDO BrahMos supersonic cruise missile successfully fired by Indian Navy