Dream of a mobile ocean colony 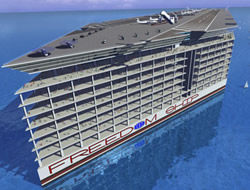 Imagine living at sea, raising your children at sea, to going to work at sea, retiring at sea and at the same time moving around the world. Some people have dreams like these.

Norman Nixon, in the late 1990s, proposed the idea of a gigantic project called the Freedom Ship and said it offered a “free international lifestyle facilitated by a mobile ocean colony.” The idea encompasses the world’s first floating city.

Freedom Ship International is trying to raise USD 10 billion to start the construction, which has been several years in the planning. The company hopes that the needed USD 1 billion will be raised soon so the construction could be launched.

The floating construction, if ever built, would be more than 4 times longer than the Queen Mary cruise ship. The city would be 750ft (228.6m) at the beam, 350ft (106.6m) high,4,500ft (1.2192m) in length and it would weight 2.7 million tones. The mobile modern city, by the design, would feature luxurious living, an extensive duty-free international shopping mall, and a full 1.7 million square foot floor set aside for various companies to showcase their products. The airport on the ship’s top deck would serve private and small commercial aircraft. The world’s first floating city would be powered by solar and wave energy.

The proposed voyage of this massive ocean-going vessel would continuously circle the globe, covering most of the world’s coastal regions.

This concept would include a wide array of recreational and athletic facilities, worthy of a world-class resort, making Freedom Ship a veritable ‘Community on the Sea’, describes the official site of the Freedom Ship project.

Freedom Ship International’s initial net construction costs were USD 6 billion in 1999. However, by 2002, estimates had risen to USD 11 billion.

Although the initially stated in-service date was to be 2001, no construction had begun so far.

This news is a total 1363 time has been read