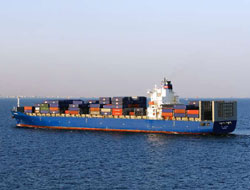 Container freight rate from India to Europe has dropped by nearly 30 per cent in the last one year.

Container freight rate from India to Europe has dropped by nearly 30 per cent in the last one year.

The situation is even worse in countries such as Hong Kong and China, with freight rates to Europe dropping by nearly 70 per cent in the last one year.

While this is good news for exporters, shipping lines are badly affected, according to industry sources.

The freight rate from Chennai to ports in the UK, and Antwerp and Hamburg is around $700 a twenty-foot equivalent unit (TEU) compared with around $1,000 and $1,100 a year ago. The situation is almost the same in other ports.

On the other hand, a 20-ft container from Hong Kong to Hamburg could be shipped for around $350 (excluding various surcharges) compared with around $1,400/TEU a year ago. There is over-capacity in the Asia-Europe route, the source said.

?We are better off than some of our competitors as there is overcapacity in other countries. For exporters, this is the best rate they can get from India. But for shipping lines, this is a bad situation with high bunker and fuel costs,? said a source.

Some of the major commodities from India to Europe include leather garments (mainly to Germany, France and Italy) and textiles (to the UK, France and Germany). Volume continues to be high, the source said.

From Chennai port, about 45 per cent of the container throughput is for Asia/South East Asia, 25 per cent is to Europe, 20 per cent is to the US and the rest is shared among other destinations, including Africa and Australia. Till August-end of the current fiscal, DP World, Chennai, handled 5.23 lakh TEUs.

This news is a total 2029 time has been read