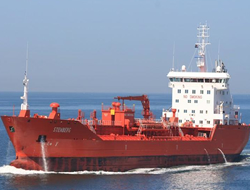 The captain of a chemical tanker has been arrested by the Swedish Coast Guard on suspicion of operating his vessel while being drunk.

A Coast Guard inspection revealed that the captain had a blood alcohol content of 0.6 milligram, when the legal limit is 0.2. The ship was carrying 15,000 tons of naphtha - a harmful product for both humans and the environment.

It was a pilot who alerted the Coast Guard early Monday morning. The tanker Stenberg, loaded with naphtha – an environmentally hazardous and inflammable cargo – was on his way to Stenungsund from Ventspils in Latvia. Stenberg is 144 meters long and 23 meters wide.

When the pilot came onboard the ship, he discovered that the commander was not able to navigate. The pilot decided to put the vessel at anchor and alert the Coast Guard.

The Coast Guard launched an investigation and has turned the case over to prosecutors. The commander, who has been arrested and is in police custody, will be interviewed by the Coast Guard shortly.

Naphtha is a petroleum product that is particularly harmful to humans and aquatic organisms and may cause long-term damage to aquatic life.

This news is a total 1515 time has been read