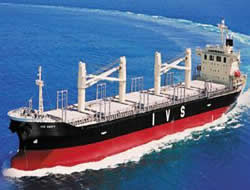 The Baltic Dry Index managed to recover some of its losses, by the end of the previous week, regaining some ground.

The Baltic Dry Index managed to recover some of its losses, by the end of the previous week, regaining some ground.

Friday it gained another 100 points to finish the week at 3,583 points, down from the high of 4,291 points, reached just 10 days ago. According to Weberseas latest weekly report, ?the indices continued their slide for the best part of the week however , by Thursday it was evident that this downturn would be short lived as the caper and panamax indices moved upwards and continued with strong gains on Friday. Even though on a week-to-week basis all of the indices were in the red the market is showing resilience in that downturns are short lived? the broker said.

Another indication of the dry bulk market faring better, is the number of transactions moving forward in the sale & purchase market for second hand vessels.

According to brokers, there is an abundance of purchase enquiries, not to mention deals going through. ?No matter what vessel is placed in the market for sale there are now buyers enquiring, inspecting and offering and more and more owners are taking this opportunity of capitalizing and cashing-in at ever increasing price levels? said Weberseas.

Combined with that came the increasing interest by Hellenic shipping companies, which have become active in the last couple of weeks, when during the previous 1-2 months it was the Far Eastern buyers who proved the ?champions? in that front. Greeks have been involved in the purchases of the panamax bulkers BOOMERANG (76k/2004 Japan) and FOUR COAL (74k/2000 Japan) sold for US$ 35.8 million and US$ 27.5 million respectively. Greeks are also rumored to be behind the sale of the BONITA (76k/2001 Japan) at US$ 25.5 million (judging from the price this must be an old sale).

The reason for the renewed interest for the acquisition of vessels at today"s prices is the fact that they offer large prospects for profit. It"s all a matter of timing in shipping and the market"s rebound from the lows of 663 points of the previous December, offers the opportunity of quick returns on investments, should a ship owners acquire a second hand vessels at today"s values. It also offers a great chance of risk hedging, especially for owners whose fleets are mainly consisted of vessels acquired on the peak of the market.

This was particularly highlighted in the recent press conference of the Hellenic Shipbrokers Association, just ahead of the two-day international conference ?Pireas 2009?, to be held in the following week (18-19 June). They mentioned that a particular dry bulk vessel previously valued at $33 million, is now priced at $6 million, providing for a great investment opportunity.
Still, the market"s recovery appears to have temporarily put a halt in demolition agreements, with no new deals reported for the previous week. With prices remaining firm, especially in China, where prices are practically at par with the Indian sub-continent, owners should capitalize on them, instead of turning away and re comissioning their older bulkers. The market could use as much limiting of tonnage as possible, when one considers the huge orderbook pending to be delivered during 2009 and 2010. It"s a dangerous game to play and one that could backfire before you know it, since the world economy remains in this fragile state.

This news is a total 1973 time has been read