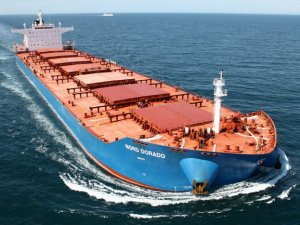 In its latest weekly report, shipbroker Allied Shipbroking said that “it has been a tough couple of weeks for the dry bulk market

With the brakes having been applied by charterers once more and rates rolling back slightly as the market went silent in terms of fresh interest. We seemed to be on the verge of a gradual downtrend that if it were so would continue through into the New Year. In the midst of this however, there still seems to be some positive momentum reserved in the background which may well keep things buoyant for a little while longer and may even hold a final positive rally before the gradual retreat”.
According to Allied’s George Lazaridis, Head of Market Research & Asset Valuations, “interest in the major dry bulk commodities seems to be on a softening curve now. This has been greatly reflected in the price tumbling noted in the futures contracts in China this past Wednesday. Iron ore, the top commodity moved in the dry bulk market and a key ingredient in steelmaking, noted a drop of as much as 4.6 per cent. With steel production cuts starting to take shape and overall demand starting to slowly tail off now, many are starting to get a sense that this year’s market peak has now past. A similar bearish feel was being seen in the prices for coal, with the price of thermal coal down by 0.8 per cent, just after rounds of discussions ended between policy makers, major producers and utilities which set local coal prices for 2018 at the same contract prices we were seeing in 2017. Being a disappointment for the major utilities, the fear is that an increased pressure would start to be felt in the market and possibly eating away some of the positive momentum noted during the past year”.

Lazaridis said that “these seemed to be more so temporary shocks on the prices of these commodities rather than any fundamental change in the market, with markets spooked slightly from the crackdown that has taken place in the steel producing and coal mining industries. Having said that, as the week came to a close there was a sense that a slight improvement may well be in sight and most traders were starting to feel a resistance emerge in the market. With the rest of the dry bulk commodities still showing some strength in fresh interest, more so in trades such as for steel products as China looks to shift the ample stockpiles it compiled over the past couple of months and the grain trade as both Russia and the US seem to have accumulated a fair amount of stocks from the latest harvests, there may well still be enough fundamentals in the market to help drive things in a positive direction for the remainder of the month”, Allied’s analyst noted.

He continued his analysis by stating that “even from the iron ore and coal trade, some traders are still holding a positive outlook for the next couple of weeks, with the crackdown made on steel producers and miners by the Chinese government possibly leading to an ever bigger shift towards higher Fe content iron ore (a trend that has been well noted these past couple of months as the price gap between different qualities of iron ore really started to widen), and better quality coal which is less pollutant (although in terms of steel making the cut down in emissions would bring about in theory a decrease in coal used for steel production). Mixed messages you may well think, though overall, we do still see a fairly positive picture being painted for the remainder of the year. Expectations should still hold off a gradual softening to be noted before we reach the end of the year and a trend that should in theory continue up until the Chinese New Year in early 2018. For the moment though there may still be some positive developments to be seen along the way”, Lazaridis concluded.

This news is a total 1200 time has been read
Tags: Dry Bulk Market Looking in Good Shape Until the end of 2017