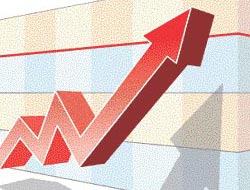 The BDI has edged upwards for almost 20 consecutive sessions. Last week?s ?stars? of the rise were the capesize vessels, which have practically taken off.

Another week of cheers for dry bulk ship owners, as the sector"s leading market index, the Baltic Dry Index managed to keep its positive momentum and gain an additional 25%, reaching almost 3,500 points, the highest point since the previous September, just before the financial crisis stepped in to change everything.

The BDI has edged upwards for almost 20 consecutive sessions. Last week"s ?stars? of the rise were the capesize vessels, which have practically taken off.

The Baltic Exchange reports that the capesize market is "red-hot for now with no end in sight as more cargoes pile into the market and tonnage is 'incredibly tight' in the Atlantic." A 170,000-tonne 1997-built vessel open mid June on the Continent fixed for a trip via Brazil to South Korea at $90,000 daily - and a $100,000 daily does not seem far off, it says.

These are much needed news for dry bulk ship owners, which have been plagued by very low rates for a series of months. The capesize rates alone had fallen as much as less than $10,000 in early December, when global trade had been brought to a virtual halt.

During the previous week, the Baltic Capesize Index gained more than 40% week on week, to reach 6,125 points, while the Panamax Index added over 26%. According to market analysts, as well as the latest weekly report by Weberseas, a crucial factor for the increase of capesize rates is the big congestion delays observed in China, with approximately 80 capers waiting for berths to discharge their cargoes, mainly consisted of iron ore. Queues are lengthening at the other end of the supply chain as well. The number of vessels of all classes waiting outside Australia's giant Newcastle coal loading terminal has swelled from 15 in the middle of February to 35.

China has been importing huge volumes of ore since February, with volumes hitting a new peak of 57 million tonnes in April, up 33 percent from year-ago levels. Strong inflows are expected to continue in the near term with high forecast arrivals in both May and June. After this good run and maybe some more to come, the key element will be tonnage supply, with the huge pending orderbook being the main threat. Ship owners must refrain from the ?temptation? to keep more old vessels on service and maintain the already high levels of dry bulk tonnage heading for demolition.

The limiting of supply will prove more than crucial in the months ahead, in order to keep freight rates at high levels. On the newbuilding cancelation front, there are reportedly increasing numbers of orders scrapped, especially in China. It is estimated that as many as 28 orders have been cancelled during April, compared to a total of 16 during the first quarter of the year. Still, as Weberseas warned ?caution must be taken with any cancellation figures as, for obvious reasons; there is a lack of real information on this as the yards are trying not to disclose any facts. This, together with the fact that there is a lack of new orders, is good news for the supply side and may help in bringing stability to this market?.

But there are good reasons to think record ore imports, and the strength in freight rates, will not prove sustainable. Inventories at the main Chinese ports have risen almost 30 percent from 58 million tonnes to 75 million tonnes over the last three months. Stocks at the two largest ports on the Shandong peninsula are close to maximum capacity. As a result of that, a series of analysts expect the market to weaken at some point during the summer, since volumes will have to fall back eventually.