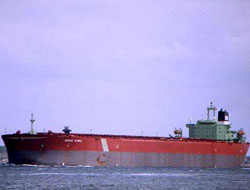 It?s clear that BDI will keep its fragile behavior for some time, at least until more cargoes start flowing in the seas.

It"s clear that BDI will keep its fragile behavior for some time, at least until more cargoes start flowing in the seas.

The Baltic Dry Index (BDI) shed gains early in the week to return back at 2,201 points (down by 70 points) after yesterday"s session. It"s clear that the index will keep its fragile behavior for some time, at least until more cargoes start flowing in the seas. For that to happen a route to a sustainable world economy must be established. After all, China alone isn"t enough for the global shipping industry. At yesterday"s session all ship types posted losses, with the Capesize retreating at 2,580 points (down by 126) and the ?star? of the previous rises, the Panamax Index closely behind, with a fall of 114 points at 2,287. Similarly, the average daily time charter for capesizes has dropped to $25,232, while for the panamaxes is now at $18,326 (down by $929 day-to-day).

In its latest weekly report Fearnley"s said that ?the capesize market, showed only marginal variations during this week. There was a short burst of activity in the Pacific as shipments out of Dampier began to return to a more normal level. The W.Australia/China rate jumped to about USD 8.00 before sliding back to USD 7.50. A steady flow of Brazil/China cargoes, especially for Vale, kept the rate on this route stable at about USD 21.00, and the fronthaul tc rate at about USD 45,500. Period activity was practically non-existent?.

Briefly though, the market had reached its highest level from the low point of December of 2008, climbing earier in the week at almost 2,300 points. The main reason for that was the nine-day rally of the panamax sector, which saw time charter rates increasing by 59% at above $18,000. Grain cargoes and large volumes out of especially South America were the factors which supported the panamax market. commenting on the panamax side, Fearnley"s noted that ?charters with cargo from South America also had possibilites by taking tonnage from Indian/Pacific areas, as owners were ballasting West?.

Things aren"t looking good though for the iron ore trade, which typically is a major influence for the capesize sector. ?With steelmakers looking to cut production again, iron ore purchases have been reduced and there are reports of distress sales and offers by iron-ore traders,? Jim Lennon, a London- based analyst with Macquarie Group Ltd., wrote in a report. ?We would expect exports from India to contract once again in coming months.?

Things are looking better in the long term for the handy sector, mainly because of a smaller orderbook, than other dry bulk ship types. The sector has managed to post slight gains during the previous Baltic session, now standing at 790 points (up by 15 from the day before), while the average time charter daily average is up at $11,398. On the short term though, the market isn"t expected to fare much better. Fearnley"s notes that the Indian iron ore market slowed down and will continue over the next one or two months.

This news is a total 3894 time has been read