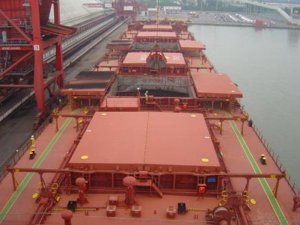 The dry bulk sector is heading for a slowdown in 2015 to a rate of 4-5%, according to the forecast by BIMCO.

In 2014, 70% of the total volume growth came from increased iron ore demand driven by China. BIMCO expects this trend to continue this year as well.

With regard to container shipping, BIMCO anticipates the containership supply to continue to grow at its “new normal” level of around 6%, making the demand side a focal point.

“European demand has been stronger than private consumption figures indicated, and we may well see further improvement for US demand. The US East Coast could build further on a remarkable year as the ports prepare for the imminent arrival of ultra-large container ships. Enlargement projects in the Panama Canal and Suez Canal will further influence the deployment of ships,” the council writes.
Overall, growth in emerging markets and developing economies is set for a comeback in 2015, with GDP-growth improving from 4.4% in 2014 to 5.0% in 2015, BIMCO went on to say.

“The common challenges remain poor inflation expectations, a lack of structural reforms and lack of job creation. There is clearly room for more political initiatives in 2015 to support the global economy,” BIMCO added.

This news is a total 2128 time has been read
Tags: 2015, BIMCO, Containership, Dry Bulk, News by topic, Outlook, SHIPPING, Slow Down