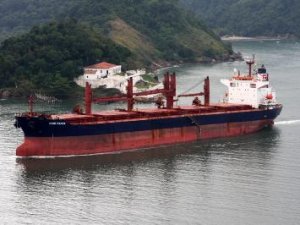 Supramax freight rates in the US Gulf Coast ticked lower this week, as easing tonnage in the region against reduced prompt requirements allowed charterers to pile pressure on shipowners and operators.

High numbers from the tail-end of last week, such as the Pacific Advance, 64,000 dwt, fixed at $24,500/d to for a grains trip to Singapore-Japan range, were no longer seen to be achievable, with one ship operator source saying “unfortunately you can’t get anything close to that today.”
The Houston to Krishnapatnam, India, petcoke route basis 50,000 mt was assessed at $36/mt Thursday, down $1/mt from year-to-date highs September 20.
Fresh voyage fixtures this week lent support to this view, with a wave of softer levels reported by market participants.
The SFL Sara, Clipper 57,000 dwt, was heard fixed at $35.65/mt for a petcoke trip from Houston to Pipavav, India, with 12,000 mt/day SHINC loading terms. Sources said this would equate to a rate around $35/mt, 50 cents lower, on standard terms at 20,000 mt/day.
This compares to freight indications for H1 October dates last week ranging from $35.50/mt at the lowest end to $39/mt at the highest.
The Thrust, 53,300 dwt, was heard fixed around $38.50/mt, also heard fixed for a petcoke trip to India. But this rate was higher than that of its peer due to a two-port discharge at New Mangalore and Muldwarka, which commands a premium due to the longer duration.
This softening is expected to continue into the first half of October, with a trickle of bearish sentiment for early Q4 entering the market this week.
While corn exports from the US Gulf Coast are expected to play an important role in supporting freight during Q4, fresh cargoes were yet to be seen.
“Grains will come by second half of October at the earliest, and I don’t think it will be full flow by then,” a ship-operator said.
The Chinese Golden Week, from October 1-8, which traditionally curtails activity in the Atlantic, is likely to see freight depressed further as charterers in Asia step away from the market and leave reduced options for vessels in the Atlantic.

This news is a total 990 time has been read
Tags: Dry bulk: Shifting fundamentals in US Gulf Coast depress Supramax freight