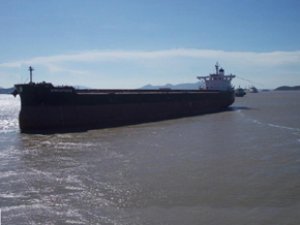 Rates have struggled all year to beat last years’ performance, and failed miserably to do so beyond Q1, with the exception of Capesizes that managed to deliver stronger freight rates in Q2 also.

Rates have struggled all year to beat last years’ performance, and failed miserably to do so beyond Q1, with the exception of Capesizes that managed to deliver stronger freight rates in Q2 also. The optimism in the market was high going into 2014, but it is likely that we will end the year on a negative note, as the December market is unlikely to turn that upside down. The upbeat ending to 2013 provided high earnings in an extraordinarily strong market to an extent that proved to be unreachable in 2014’s prevailing conditions. 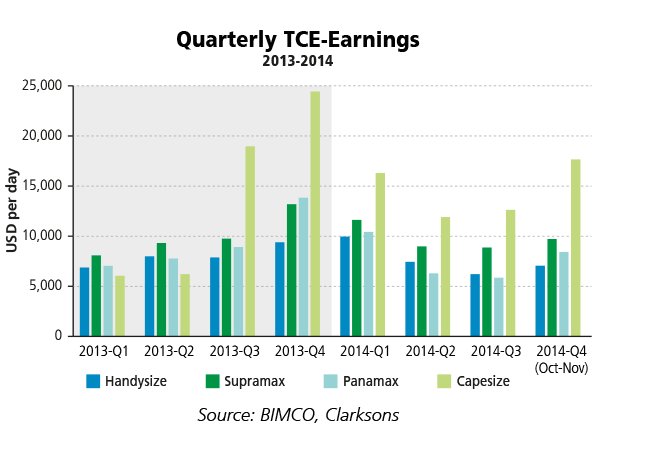 By mid-October, Capesize freight rates were rising following a month-long slide from USD 17,496 per day to USD 7,932 per day. Month-long slides are unusual in Q4. Usually, this time of year presents a completely different picture due to strong seasonal demand pushing rates up. The BIMCO freight rate forecast estimated earnings for mid-October to mid-December to be volatile in the interval from USD 8,000 to USD 23,000 and we got it – almost. Freight rates started low, and then went all the way up to USD 26,381 per day, exceeding our expectations. Since then, fortunes have reversed again.

The highly anticipated iron ore cargoes out of Brazil finally showed up and proved to be strong. Nevertheless, as they arrived late, the market quickly supplied enough ships to cater for the upswing, leaving only little room for a peak, and an elevated market that did not last long.

As regards the smaller ship sizes, they are left out as the demand situation is currently very biased towards iron ore and therefore favours Capesizes more or less exclusively. This was one reason for them not to follow suit. Rates were volatile and erratic within BIMCO’s forecast freight rate interval for the duration of October and November.

Q4 remains on target to become the strongest quarter ever in term of volumes transported – but not in terms of industry earnings. Even without the support of Chinese thermal coal imports, seasonal strength is intact. 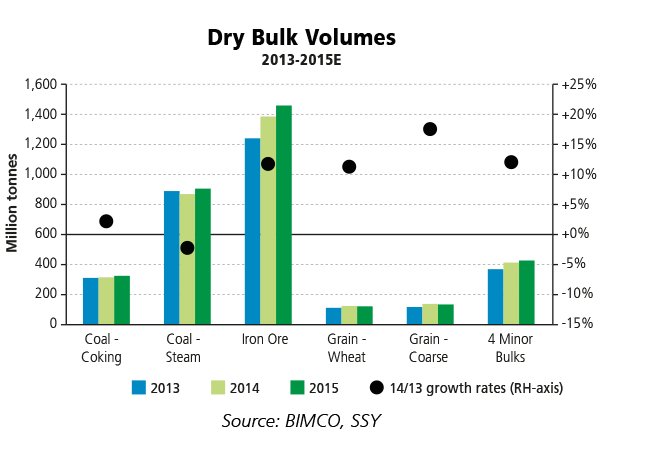 The hugely negative surprise in 2014 – thermal coal imports into China – continues to disappoint, worsening in the most recent months. Most recently, the Free Trade Agreement (FTA) between China and Australia failed to include thermal coal. It did include coking coal in the agreement though – probably because Australia provides 60% of global coking coal exports and China depends on Australian coking coal to keep its enormous steel industry running.

The order book is currently low, a sign of poor freight market conditions, leaving only few in the market to invest in the future. China is set to build 62% of the dry bulk order book as it currently stands, with Japan in a distant second place, with 27% being placed at Japanese shipyards. Contracting activity in August was weak, but October/November has been even lower and that has reversed the rising trend of a growing order book. Eighteen months ago, it stood at “just” 135 million DWT, reaching 184 million DWT in July and accounting for 170 million DWT at the end of November.

Whereas ordering activity in 2013 was exorbitant at 103 million DWT, 2014 has seen 55 million DWT ordered so far. Getting financing for newbuildings is more difficult than it has been, but as proved so many times before, it is not difficult or expensive enough to act as a restraint. Not only new players are investing; also the “established” household names of the industry are ordering.

The fleet is growing steadily, with demolition in a significant supporting role. Since the last report went out in mid-September, the pace of demolition has been rock steady: 2.75 million DWT has left the active fleet at a monthly average of 136,000 DWT. BIMCO’s full year estimate of 14 million DWT scrapped this year will thus be just a little shy of the final amount when the year closes.

It is peculiar that Handymax is the segment with the lower level of demolition activity, as that segment in particular will see a strong influx of new ships in 2015. For owners and operators that may seem like the distant future, as they are simply trying to make the best of a bad market. Freight rates for Supramaxes climbing beyond USD 10,000 per day does not inspire many to sell the ships for demolition. 2012 and 2013 saw an average scrapping age of 28 years – in 2014, it is down to 27 years. 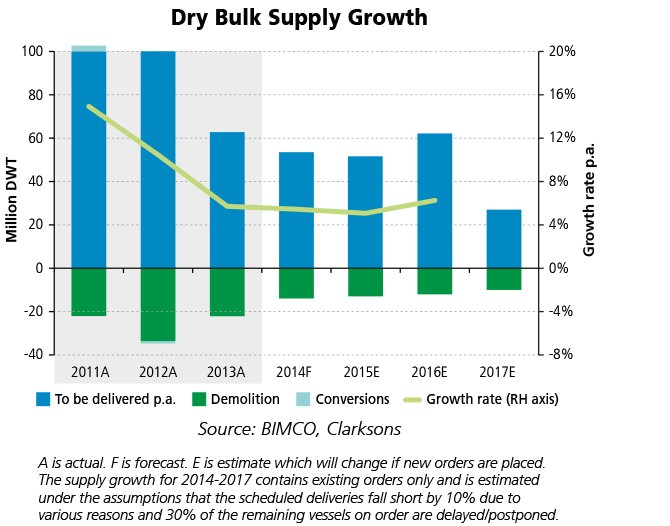 As 2014 draws to a close, the status for the year that is almost behind us is this: owners and operators did not enjoy the full upside in the freight market from the strong lift in demand volumes, as sailing distances did not “bring it home”. Most significantly, the evaporating exports of bauxite and nickel ore from Indonesia to China were only swopped for Philippines exports to a certain extent. This was painful, especially for the Handymax and Supramax market. For Capesizes, the strong iron ore volumes predominantly sailed from Australia and not Brazil, South Africa or Canada, which would have been much longer distances and thus a higher ton-miles demand for Capesizes.

Currently, 2015 looks a bit dull on the demand side, whereas the supply side seems to provide the same amount of new capacity as in 2014. Such a development will not improve the fundamental market balance and Supramaxes in particular seem to be challenged by a high inflow of new tonnage.

The current discussion about lower bunker prices and the speculative case for limiting slow steaming ought to be premature in dry bulk, as the proportion of the oversupply is still massive. For crude oil tankers at the current high rates, on selected/isolated trades and only in theory, you may be able to build a case that might support higher speeds on the ballast legs to improve earnings, as 2015 holds little supply side pressure in hand. BIMCO believes the current positive market is fragile and any “playing with fire” in terms of increasing speed and thereby actual supply may turn the tables quickly. For container shipping, and to some extent also product tankers, the case is not clear, as the market is so competitive and operators and owners have different fleets, cost profiles, and customers. However, keeping slow steaming in the back of one’s mind is a solitary first-best option for raising shipping industry profitability.

This news is a total 1526 time has been read
Tags: stronger, Brazil, Chinese thermal coal imports