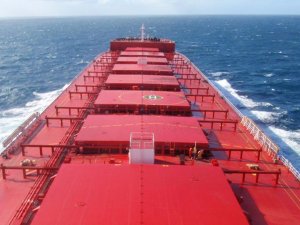 As informed, the 205,123 dwt vessel will be employed under a time charter contract with a “major coal and steel trader” for a gross rate linked to the new Baltic Capesize Index (BCI5TC) plus 20%.

Earlier this year, DryShips entered into agreements to purchase four Newcastlemaxes at “historically low prices”, for a total of USD 124 million.

The ships in question are Marini, Moritz Oldendorff, Valley Star and Wish Star, all of them bought from Hong Xiang Shipping in February, VesselsValue’s data shows. Previously, Hunter Maritime Acquisition inked agreements to buy the quarter, however, the sale subsequently failed.

Dryships earlier said that two of the acquired ships are planned to be employed under time charter contracts, while the other two are set to trade in the spot market.

The first bulker from the batch, built in 2014, was handed over to the company in May this year.

The remaining two Newcastlemaxes are expected to be delivered in the third quarter of 2017, according to DryShips.

This news is a total 923 time has been read
Tags: DryShips Adds Second of Four Newcastlemaxes