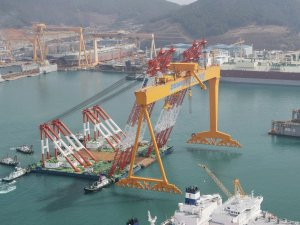 Daewoo Shipbuilding & Marine Engineering (DSME) will avoid court receivership after the main creditors and Board of Directors are close to reach the debt restructuring agreement.

The largest shareholder Korea Development Bank (KDB) and the largest bondholder National Pension Service (NPS) narrowed key differences on terms of new bailout scheme of providing new loans and rescheduling debts for the cash-strapped shipbuilder. The main obstacle for the shipbuilder is a series of corporate bonds worth 440 billion KRW maturing April 21, almost half of which are hold by National Pension Service (NPS). The both state-owned institutions agreed to guarantee the repayment of 100% of corporate bonds possibly through an third-party account, if bondholders comply with the government’s request over the debt rescheduling.

“The KDB showed responsibility as the largest DSME stakeholder and understood that the NPS’s mission is to minimize losses for pension subscribers”, said the Chairman of Korea Development Bank, Lee Dong-geol.

National Pension Service (NPS) is the largest bondholder of Daewoo Shipbuilding & Marine Engineering (DSME), holding more than 30% from the bonds, worth 1.35 trillion KRW.

“KDB and NPS officials negotiated over DSME normalization from Thursday night to Friday morning”, said the spokeswoman of NPS. “The NPS will now hold a decision-making meeting on the matter”, added she.

After their discussion, working-level officials from the KDB and NPS are working on the details.

This news is a total 719 time has been read
Tags: DSME avoid court receivership after agreed with creditors for debt restructuring