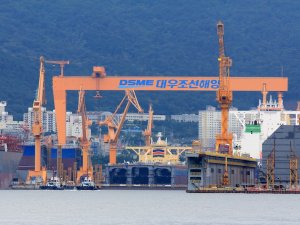 The executive, who wasn’t identified and left the company in March last year, has been charged for allegedly reducing costs of offshore projects that were under construction to inflate net income by a combined 2.76 trillion won ($2.4 billion) from 2012 to 2014, the world’s second-biggest shipbuilder said in a statement to the stock exchange late Friday.

Shares of the shipyard, which were suspended late Thursday, won’t trade until a Korea Exchange committee reviews the matter, the company said. When contacted, Daewoo Shipbuilding said prosecutors had arrested two former chief executive officers earlier this year as part of the probe, but declined to elaborate beyond what it provided in the regulatory filing.

“The company will improve transparency and strengthen internal oversight to ensure that this won’t happen again,” Daewoo Shipbuilding said in the statement. A spokesman for the prosecutor’s office in Seoul wasn’t immediately available for comment.

South Korean prosecutors have been investigating Daewoo Shipbuilding after posting its biggest loss last year on write-offs for delayed projects and creditors extended support with 4.2 trillion won of funds to ease a cash shortage. The company is among shipyards restructuring after oil prices that have more than halved in the last two years crushed demand.

Daewoo Shipbuilding posted a net loss, excluding minority interest, of 3.19 trillion won in 2015. The company restated its earnings from 2013 on the advice of its auditors to better reflect the write-offs.

This news is a total 3024 time has been read
Tags: DSME Former Chief Financial Officer Indicted for Inflating Earnings, türkishmaritime