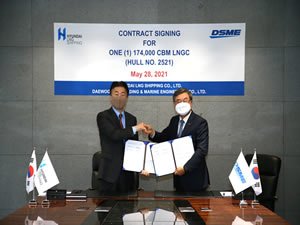 The 174,000-cubic metres LNG carrier will be built at the Okpo Shipyard. It will be delivered to the owner by the fourth quarter of 2023.

The vessel is planned for a long-term charter contract with Repsol, a major energy company in Spain.

This will be Hyundai LNG Shipping’s first contract with a European shipper.

Hyundai LNG Shipping is said to be satisfied with the fuel efficiency and performance of the two natural gas-powered LNG carriers delivered from DSME in 2017.

With this, the company has already achieved about 35.6 per cent of its annual target of $7.7 billion.