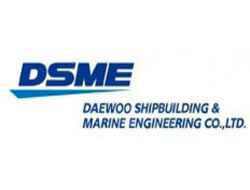 Daewoo Shipbuilding & Marine Engineering Co., the world?s third-largest shipyard, said it is in talks to buy as much as 20 percent in a Brazilian rival to seek orders from Petroleo Brasileiro SA.

Daewoo Shipbuilding & Marine Engineering Co., the world"s third-largest shipyard, said it is in talks to buy as much as 20 percent in a Brazilian rival to seek orders from Petroleo Brasileiro SA.

Daewoo Shipbuilding & Marine Engineering Co., the world"s third-largest shipyard, said it is in talks to buy as much as 20 percent in a Brazilian rival to seek orders from Petroleo Brasileiro SA. ?The local content clause is very important to win Petrobras" projects,? Chief Executive Officer Nam Sang Tae said yesterday in an interview in Seoul. The deal may be concluded by the end of the year, he said, without naming the Brazilian yard.

Daewoo Shipbuilding joins Keppel Corp. and Samsung Heavy Industries Co. in setting up manufacturing bases in Brazil to win more orders for offshore projects. Petrobas, which made the biggest oil discovery in the Americas in three decades, plans to invest $174.4 billion by 2013 on exploration.

?Competition to win more offshore orders will intensify as a lot of the builders are focusing on winning the race,? said Song Sang Hoon, an analyst at Kyobo Securities Co. in Seoul. ?Oil companies need to secure oil fields and that will mean more offshore equipment is required.?

Daewoo Shipbuilding was unchanged at 20,350 won as of 12:12 p.m. in Seoul. The stock has climbed 32 percent this year, compared with a 34 percent advance in South Korea"s Kospi index.

Petrobas Orders Petrobras, Brazil"s state-controlled oil company, plans to order five to seven drill ships, or semi-submersibles, Chief Financial Officer Almir Guilherme Barbassa said on April 20. The company will need more than 240 vessels including drill ships, tankers, production platforms and supply vessels in the next five or six years, Barbassa said. The Brazilian oil company requires 70 percent of the offshore orders to be built in the country, so the shipbuilder needs to have a presence there, Nam said. ?I"m confident we"ll take part in the Petrobras project as we have strength in building rigs and drill ships,? Nam said. ?It"s just a matter of how many we can grab.? Keppel, the world"s largest builder of shallow-water oil rigs, is conducting feasibility studies to buy a stake in a second yard in Brazil, which will give the Singaporean company additional capacity to build offshore structures for Petrobras.

?We are well-placed in Brazil because it"s been proven that we can deliver,? Choo Chiau Beng, chief executive officer of Keppel, said yesterday in Singapore. ?The key point for us is to be near our customers, to be aware that countries want to keep work within their boundaries.? Keppel has fulfilled the local content clause for orders it received and delivered for Petrobras, Choo said. Samsung Heavy, the world"s second-largest shipyard, last year bought a 10 percent stake in Estaleiro Atlantico Sul, to tap orders in Latin America, including those from Petrobras. Brazil"s pre-salt area, where oil fields were recently discovered, runs 800 kilometers (500 miles) along the coast. It has oil deposits under a layer of salt resting as much as 3,000 meters (9,800 feet) beneath the ocean surface and another 3,000 to 5,000 meters below the seabed.

This news is a total 2652 time has been read