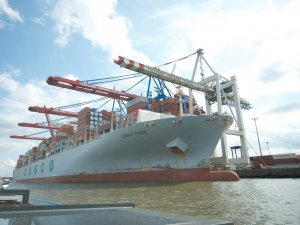 Duisburger Hafen AG (Duisport) will withdraw its coal island from the market in 2020, and build a trimodal container terminal on the site together with its international partners COSCO Shipping Logistics, Hupac SA, and HTS Group.

Duisport said it will instead use the coal island to handle the booming trade with China. The new terminal will be developed into the “key European gateway hub to handle train traffic along the corridors of the New Silk Road”, and will operate under the name "Duisburg Gateway Terminal".

Around 30% of all rail-based trade between China and Europe runs through the Port of Duisburg and between 35-40 trains per week run between Duisport and a dozen different destinations in China. The terminal will significantly increase the port’s capacity for trade with China.

In the future, up to 100 China-bound trains per week, rail traffic on the European rail corridors, in particular to eastern and southeastern Europe, and inland waterway services to seaports will operate from the Duisburg Gateway Terminal, generating an annual throughput of around 850,000 TEU upon the terminal’s completion. "We are reacting to the changing market and are building Europe’s largest container terminal in the hinterland on the coal island, consolidating our leading position in Chinese trade, creating jobs, and strengthening North Rhine-Westphalia as the most important logistics location in Europe," explained Duisport chief executive officer Erich Staake.

On the 240,000 m2 area in the Port of Duisburg, 220,000 m2 is planned for the terminal and 20,000 m2 for warehouses. Six gantry crane systems, 12 block train platforms with a track length of 730 m each, five loading areas and three berths for inland vessels, as well as a container storage area of 60,000 m2 will ensure rapid container handling in two construction stages.

Pre-carriage and onward carriage of goods at the trimodal terminal are to be handled primarily by water and rail. The terminal is set for commissioning in 2022.

Since the China trains increasingly represent a cost-effective alternative to air transport, the Duisburg Gateway Terminal will also save approximately 60M tonnes per year of CO2.

Duisport and COSCO Shipping Logistics each hold 30% of the investment and operating company with Hupac SA and HTS Group each holding 20% of the shares. Switzerland-based Hupac Group network comprises 130 trains daily with connections between the largest European economic areas, Russia and Asia.HTS Group is a Dutch inland waterway transport company which, in addition to its own fleet of vessels, operates terminals in the Netherlands, Belgium, and Romania.