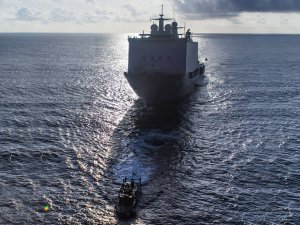 The Royal Netherlands Navy’s amphibious transport ship Johan de Witt will receive a midlife upgrade (MLU) as it has almost reached the halfway point of its expected lifecycle.

The upgrade will guarantee its capabilities until 2032 and keep the ship operational, Dutch shipbuilder Damen said.

Damen Schelde Naval Shipbuilding and RH Marine, which specializes in maritime electrical and automation systems, are carrying out the contract with the Defence Material Organization and the Naval Maintenance and Sustainment Agency, the maintenance branch of the navy.

On January 31, contracts were signed with Damen Schelde and RH Marine, with works expected to start in late 2021.

The preparatory phase is now ready and the contracts concern the basic design phase. This is followed by detailed engineering, after which work preparation and execution can start. For efficiency reasons, the MLU is combined with planned periodic maintenance, according to Damen.

In the basic design phase, more than 60 MLU modifications and the maintenance works are processed into a well-functioning overall plan. The modifications vary from installing additional weapon systems to solving structural problems.