Dutch Freighter to be Retrofitted With Folding Wing Sails 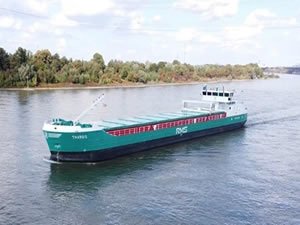 A Dutch diesel-electric freighter will soon be fitted with a set of wing sails to help propel her regular voyages between Germany and the UK.

The 2,400 dwt Tharsis is the latest vessel to install removable sail units designed by the Dutch wind propulsion company eConowind.

The newly designed flatrack-mounted aluminum airfoils can be folded up and down as needed - an important consideration for vessels like Tharsis, which operates on routes with air draft restrictions so low that she was built with an elevating wheelhouse.

The flap-shaped airfoils are self-adjusting via a small "steering wing," which orients them properly to the wind.

With flatrack ISO container mounting, eConowind's sail systems can be picked up and moved when needed, solving one of the major issues for wind propulsion aboard dry cargo vessels.

"We are delighted to add Tharsis to our customer base, and with both river and North Sea routing with varying winds we expect a lot from the TwinFoil.

Of particular interest is the combination of this self-adjusting technology in combination with a modern diesel-electric drive, which in theory should give optimal results.” Comments Frank Nieuwenhuis, CEO of eConowind.

The project is backed by the EU Wind Assisted Ship Propulsion (WASP) program, supported by the European Regional Development Fund.

The fabrication and installation work has additional support from the Dutch Ministry of Economic Affairs and Climate Policy.

eConowind's previous installations include permanent and containerized wind propulsion systems based on a "ventifoil" design, which uses a fan system integrated into the wing to create boundary layer suction and provide additional power.

The ventifoil model has been retrofitted in a permanent installation aboard the freighter Ankie, and the removable container-mount version has been tested aboard the Lady Christina.

This news is a total 4100 time has been read
Tags: Dutch Freighter , regular voyages , Retrofitted