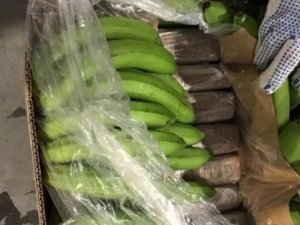 In a series of raids across 30 locations in Zeeland Wednesday morning, Dutch police arrested nine suspects in connection with a suspected cocaine smuggling ring at the port of Vlissingen.

A total of about 400 officers were involved in the operation. "Because we do not want to take risks, we deployed SWAT teams," a police spokesperson told NU.nl.

Dutch authorities suspect that there are several related criminal syndicates that are involved in the importation of cocaine via Vlissingen's harbor. One group is believed to handle the cargo operations and another is suspected of working as an intermediary or broker to handle the trade. Wednesday's raids are intended to collect information and evidence in multiple investigations related to this scheme, police said in a statement.

The arrests follow a long string of drug busts in containerized consignments of bananas at Vlissingen and other nearby ports. A cargo of bananas with a hidden cache of 4,500 kilos of cocaine was discovered at the port this April - one of the largest single seizures ever made in the Netherlands. Another 900 kilos were discovered in the same manner in January, another 1,200 kilos in December 2019, and two shipments of 1,000 kilos and 1,550 kilos each in October 2019.

Cocaine is Europe's most popular illegal stimulant and its second-most popular illegal drug after marijuana (by value). The EU has also become a distribution hub for shipments bound for other markets, including Australia, New Zealand, Russia, Turkey and countries in the Middle East and Asia, according to Europol. EU cocaine trafficking has recently been run by a diverse range of European and non-European organized crime groups, not only the Italian and Colombian syndicates which historically managed the trade.

Container shipping is a popular method for transporting cocaine from producing nations in South America to European markets. Last year's record-setting 20 ton cocaine bust aboard the container ship MSC Gayane was carried out by U.S. agents at an American seaport, but it was likely headed for the European ports that came later on the vessel's itinerary, according to investigators.

This news is a total 1362 time has been read
Tags: Dutch Police Arrest Nine in Vlissingen Cocaine Smuggling Scheme