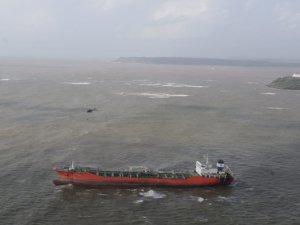 The government of India has selected a Dutch salvage company to salvage the chemical tanker Nu-Shi Nalini which ran aground off Dona Paula at Goa in late October.

The USD 3.4 million contract was awarded to Marine Masters, which was one of only two companies that had submitted bids to undertake the salvage works.

Singapore-based Smit Salvage withdrew its bid on November 12, leaving Marine Masters the only available company for the operations, according to media reports.

The 16,700 dwt Nu-Shi Nalini ran into trouble in adverse weather conditions caused by Cyclone Kyarr, due to which the vessel started to drift from the anchorage off the Port of Mormugao until it ended up aground near Dona Paula. The tanker is reportedly loaded with 3,000 metric tons of naphtha.

The salvage operation is set to last 30 days with the offloading of the tanker’s cargo expected to take 10 to 12 days.