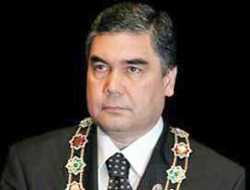 Turkmen leader Kurbanguly Berdymukhamedov will discuss the project of building a natural gas pipeline bypassing Russia with the government of Turkey.

Turkmen leader Kurbanguly Berdymukhamedov will discuss the project of building a natural gas pipeline bypassing Russia with the government of Turkey.

Turkmenistan, Central Asia's largest gas producer, exports most of its gas through Russia but the European Union is lobbying for it to use an alternative route.

A government official who asked not to be named said Berdymukhamedov would discuss the project during his visit to Turkey on March 24-25.

"The Transcaspian pipeline or, if you prefer, Nabucco is on the agenda," the official said.

"But within this visit the discussion will probably be limited to an exchange of opinions."

The official said Turkmenistan was ready to consider any viable export routes.

"We are pragmatic," he said. Turkmenistan sells all of its exported gas to Russian gas monopoly Gazprom , but is considering other options such as Nabucco and a pipeline to China.

Turkmen leader due to Turkey

Gurbanguly Berdimuhamedow, President of Turkmenistan, will pay an official visit to Turkey between March 24th and 25th upon an invitation from Turkish President Abdullah Gul.

This will be the first visit of Berdimuhamedow to Turkey after being elected as the president. Important economic and cultural agreements are expected to be signed during the 2-day visit.

Turkey was the first country recognizing Turkmenistan on December 16th, 1991 after this country announced its independence.

Diplomatic relations between Turkey and Turkmenistan were established on February 29th, 1992 and more than 100 agreements and protocols were signed.

Volume of the projects undertaken by the Turkish companies in Turkmenistan in 2007 exceeded 3 billion USD.

Trade volume between Turkey and Turkmenistan rose more than 50 percent when compared with the figures of 2006. According to the formal figures of Turkmenistan, there are 428 companies, having Turkish capital, acting in this country.

Turkish entrepreneurs invest mainly in textile, construction, energy and food industries in Turkmenistan. Co-operation on education is also very important in relations of the two countries. 4,800 Turkmen students were given education opportunity with scholarship granted by Turkey in the recent years.

This news is a total 2289 time has been read