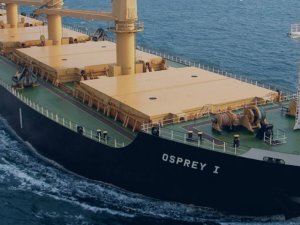 US based owner-operators of Supramax dry bulk vessels reported a loss of $16.6 million in its fourth quarter ended December 31, 2017, compared to a net loss of $142.4 million for the fourth quarter in 2016.

The shipping company posted revenue of $74.6 million in the period, representing an increase of 78% compared to the same period in 2016.

Gary Vogel, Eagle Bulk's CEO, commented, "During the fourth quarter, Eagle Bulk's active management operating model drove outperformance of the benchmark Baltic Supramax Index for the fourth consecutive quarter, resulting in positive operating income for the first time in seven years.  We believe our results are indicative of a competitive advantage that will benefit us as market conditions continue to improve."

Gary added: "We are also pleased to have completed a comprehensive refinancing in December that significantly strengthened our balance sheet, lowered borrowing costs and extended maturities.  In the process, we also gained financial flexibility to ensure that we can act opportunistically and deliver value to our shareholders."

Net time and voyage charter revenues for the three months ended December 31, 2017 were $74.6 million compared with $41.8 million recorded in the comparable quarter in 2016.

This news is a total 796 time has been read
Tags: Eagle Bulk Shipping Reports 4Q Loss