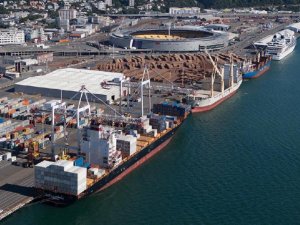 The earthquake which struck New Zealand on November 14 affected financial results of CentrePort, Wellington port operator, as the company suffered a net loss of NZD 35.7 million (USD 25.3 million) in the second half of 2016.

CentrePort has achieved net underlying profit after tax (before earthquake provisions and Fair Value Adjustments) of NZD 8.8 million for the six months to December 2016.

Despite the disruption, CentrePort’s revenue for the six months to December 2016 was steady at NZD 34.4 million, compared to NZD 35.5 million seen in the same period of 2015.

According to CentrePort, the positive result was possible because of hard work to resume operations immediately after the earthquake. Within 48 hours the port resumed key operations including ferries, fuel, logs, and breakbulk trade.

“We are in the midst of one of our busiest cruise seasons and are seeing strong volumes of other key trades such as cars and logs,” Derek Nind, CEO of CentrePort, said.

Nind added that the management team is making “good progress” on the recovery and plans to build resilience into the business.

“We were recently pleased to announce the resumption of regular container services at CentrePort using geared ships, with more services expected soon. Meanwhile, temporary repairs are well underway that should allow us to resume modified operations using our gantry cranes within four to six months,” Nind pointed out.

The port’s container area sustained significant damage in the earthquake measuring a magnitude of 7.5 which left the port’s two 86-metres high and 720-ton gantry cranes inoperable.

This news is a total 1171 time has been read
Tags: Earthquake Affects CentrePort’s Earnings