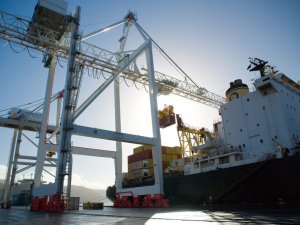 New Zealand’s ports of Wellington and Picton have issued damage notifications while Wellington authorities said that both the port and wharf gates will remain closed for the next seven days in the aftermath of an earthquake measuring a magnitude of 7.5 wh

According to Inchcape Shipping Services (ISS), no ship or cargo operations will be permitted in the mentioned areas. When certain sections are cleared by engineers selective operations may be allowed to recommence during this period.

Wellington has gantry crane issues, wharf subsidence and log pile collapses. Cook Strait cargo/pax ferries are all at anchor as terminals at Wellington and Picton have substantial damage.

There are reports of damage to wharves and the inter-island ferry terminal as well, while the forestry and cruise berth at Shakespeare Bay has reported damage and subsidence.

Derek Nind, Chief Executive of CentrePort, situated in Wellington, said that CentrePort “sustained damage to buildings and the port and also some liquefaction and differential settlement in places.”

Following New Zealand’s biggest earthquake in 150 years, ISS said that aftershocks are continuing in the upper South Island and Wellington region, some over a magnitude of 6.

A tsunami warning was withdrawn early this morning, with unusual tidal surges and currents continuing throughout the day. ISS was involved in the evacuation of a number of ships to sea overnight after a tsunami warning was issued. These vessels have now returned back into the ports.

This news is a total 2462 time has been read
Tags: Earthquake Hinders Port Operations in New Zealand