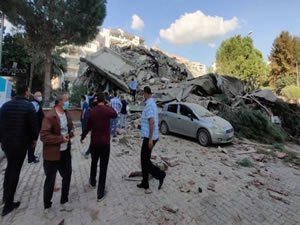 A powerful earthquake has struck off Turkey's Aegean coast, north of the Greek island of Samos.

The 7.0 magnitude tremor was centred off Turkey's Izmir province, the US Geological Survey said, and was felt as far away as Athens and Istanbul.

Turkey put the magnitude of the quake at 6.6, saying 20 buildings collapsed in the city of Izmir.

The tremor is reported to have triggered a mini-tsunami that flooded the port of Samos. So far there have been no reports of casualties.

Turkey and Greece both sit on fault lines and earthquakes are common.

Reports said Friday's quake was also felt on the Greek island of Crete. Video on social media showed people searching through the rubble of collapsed buildings.

Witnesses said people in Izmir poured on to the streets when the earthquake struck.

In January more than 30 people were killed and more than 1,600 injured when an earthquake struck Sivrice in Turkey's eastern Elazig province.

In July 2019, the Greek capital Athens was hit by a tremor that knocked out power to large parts of the city.

A powerful quake that struck the Turkish city of Izmit, near Istanbul, in 1999 killed about 17,000 people.

This news is a total 3717 time has been read
Tags: Greece , Earthquakes , Turkey , izmir