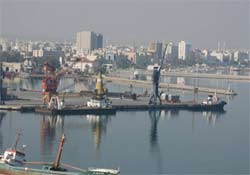 The Aegean Exporters’ Association (E?B), who bought the rights of operation for ?zmir’s port with an unexpected $1.28 billion bid, now longs to posses the ?skenderun port

The Aegean Exporters’ Association (E?B), who bought the rights of operation for ?zmir’s port with an unexpected $1.28 billion bid, now longs to posses the ?skenderun port.

The Aegean Exporters’ Association (E?B), which acquired the operating rights for the Port of ?zmir with an unexpected $1.28 billion bid, now hopes to also secure the rights of operation for the Port of ?skenderun, one of Turkey’s most important, located in the southern province of Hatay.

E?B’s Chairman Tar?k Bozbey announced yesterday that they wanted to take part in a consortium to jointly bid for the ?skenderun port.

The Port of ?skenderun, which is in a strategically critical position since its territory encompasses the Mediterranean, has long been awaiting privatization. The last time the port earned a profit was when the US used it to transfer military equipment for its troops in Iraq. Business circles are complaining that the port is too bulky and cumbersome and that if it can be renovated to become more efficient, it will become an important gate for boosting exports from the surrounding region. The equipment in use is more than 50 years old and needs to be modernized.

Although it is one of Turkey’s five big ports and the only gate opening Southeastern Anatolia Project (GAP) and eastern Mediterranean economies to the world, the Port of ?skenderun is suffering one of its most stagnant periods. It has almost been abandoned to corrosion, and no steps have been taken to replenish the port. On the other hand, private wharves just next to the port are increasing their profits every year, such as the one in the nearby Sar?seki Industrial Zone, for example, which handles between 2 and 5 million tons each year.

Ali Bolat, manager of Ek-Mar Port&Wharf, said the wharf at the Ekinciler iron and steel factory is handling around 2 million tons of goods in a year, earning them some $4-5 million annually. An average amount handled on a private wharf in the industrial zone is between 3 and 4 million tons, he added. Port of ?skenderun Manager Cumhur Öztürkler asserts that his port is the most suitable one to construct a container terminal. He also claims that such investments are vital since the GAP project will significantly boost the potential of exports from the region, which makes it an urgent necessity to modernize the port. “If we also consider that the Port of Mersin is stressed over its capacity, the obligation to create a container terminal in ?skenderun becomes more obvious,” said Öztürkler.

?skenderun Chamber of Marine Trade Bülent Kavsak claims that Turkey missed the boat to privatize the port 10 years ago. The port, which hosted 1,500 workers at that time, employs only 350 people now. Its tariffs are also seen as too expensive by purchasers. While it demands $5 per ton to handle containers, private wharves are doing the same for half the price.

Meanwhile, the E?B’s board gathered together yesterday to discuss a partnership structure with its subsidiary, Port Services and Transportation Corp. (L?MA?). The final decision is expected by Monday.

This news is a total 2515 time has been read