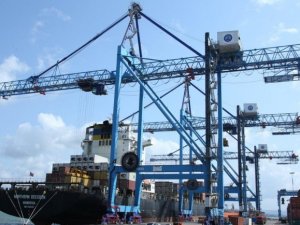 The Kenya Ports Authority’s (KPA) will launch two ultra-modern diesel electric cranes by mid-2018 at the Port of Mombasa to keep a tab on pollution on its premises.

KPA Managing Director, Catherine Mturi-Wairi said that the equipment that were bought at a cost of USD 8.7 million are aimed at attaining acceptable standards of green policy practices.

“The cranes will provide dust and spillage-free unloading through a dust control system that minimises escape of dust during discharge,” she said.

Unlike the mobile harbour cranes, currently used at the port which handles one vessel at a time, the new cranes will handle two vessels simultaneously.

Mturi-Wairi added that the two portal harbour cranes are part of a comprehensive program in supporting the Port of Mombasa’s resilient port infrastructure initiatives.

This news is a total 2545 time has been read
Tags: Eco-Friendly Cranes for Mombasa Port to Check Pollution