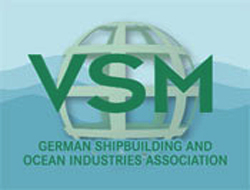 The German Shipbuilding and Ocean Industries Association, which represents the interests of German shipyards, marine equipment suppliers and ocean industries, presented a gloomy picture of the current situation in the sector at its members? meeting this y

The German Shipbuilding and Ocean Industries Association (VSM), which represents the interests of German shipyards, marine equipment suppliers and ocean industries, presented a gloomy picture of the current situation in the sector at its members" meeting this year.

In statistical terms, the situation for the German shipbuilding industry is still good for 2008 . Sector sales of all shipbuilding companies, including yards building oceangoing, inland and naval vessels and engaging in repairs and conversions as well as boat and yacht builders surged by about 41% to approx. ?7.2 billion compared with 2007, and marine equipment suppliers also reported growth in sales, which reached approx. ?13 billion.

However, these statistics no longer reflect the current position. The fact is that the market environment has fundamentally changed in the last six months with a serious downturn in the entire maritime sector that has been faster and more dramatic than expected in the wake of the global financial and economic crisis.

Global transport volume and charter rates have fallen since the beginning of the financial crisis, with worldwide demand for ships also plummeting by approx. 90% between October 2008 and March 2009. Moreover, because of banks" restrictive lending policy, shipyards and companies placing orders have had considerable difficulties obtaining the requisite finance for a shipbuilding contract.

German shipyards building oceangoing vessels delivered a total of 84 ships with approx. 1.3m cgt worth close on ?4.4 billion in 2008, thus achieving their best result for the year since Germany"s reunification. In the same period, they booked new orders for 46 units totalling 0.6m cgt worth ?2.9 billion. Related to the whole of the past year, incoming orders thus declined to their lowest level since 2001 and construction volume corresponded to only about half of annual production.

As a result of the declining order trend and numerous cancellations, orders on hand fell to 172 units totalling 3.1m cgt worth ?13.3 billion up to December 31st 2008. There were 19 cancellations valued at approx. ?940m in the first quarter of 2009. No new orders could be booked in the same period. An overall 16 units totalling 275,000 cgt worth ?900m were delivered. Orders on hand thus continued to decline, falling to 139 units with 2.5m cgt worth ?11.5 billion.

Naval shipyards achieved stable sales in 2008. As demand from the German Navy alone does not suffice to utilise fully the available capacities of naval shipyards, these remain heavily dependent on export business.

Conversion and repair shipyards achieved sales topping the ?1 billion mark for the first time in 2008 after record levels already in 2006 and 2007. But the number of enquiries in this segment also tapered off significantly at the end of last year. Order volumes were in some cases considerably reduced and planned orders cancelled at short notice.

After registering good results in the first half of 2008, shipyards building inland waterway vessels were also affected by the global financial and economic crisis at the turn of the year. For the first time for five years, fewer goods were transported than in the previous year. However, production reached its highest level for many years with 87 ships and water craft delivered worth approx. ?144m. Demand for river tourism vessels again claimed a high share of this total. Incoming orders remained well up with 63 units worth approx. ?141m.

The boom in recent years enabled German marine equipment and offshore suppliers to achieve stable growth and further consolidate their position as export world champions. Business in 2008 apart from the last few weeks was also very good with increasing sales and extensive orders on hand. However, the economic crisis also arrived this segment at the latest since the 1st quarter of 2009.

It is clear that 2009 will be a crucial year for the German shipbuilding industry. Numerous cancellations and the few incoming orders are causing gaps in companies" employment planning, as well as making difficult the ongoing process of the necessary switchover of the product range.

?The continued switch to innovative, high-value, well-equipped special-purpose vessels is correct, but needs time. If we fail to give shipbuilding companies a breathing space with securing the remaining orders on hand, there will be location closures instead of new products,? warned VSM chairman Werner Lüken in his address. ?Statistically, German shipyards have work on a cgt basis for the next two to three years. But this order backlog is in fact accounted for by only a few companies. Many shipbuilders will soon no longer be able to achieve full capacity utilisation. Short-time working across the board and possibly redundancies will result,? continued Lüken.

The problems are exacerbated by the fact that in the current situation more and more commercial banks are withdrawing from ship financing. Shipyards face considerable difficulties procuring the necessary funds. This affects both liquid funds and procurement of credits by way of bank guaranty. These problems could not be solved just with the ? welcome ? explicit inclusion of German shipyards in the KfW (Reconstruction Loan Corporation) special programmes for company financing. Although these instruments offer a 90% release from liability, in the final analysis they are too expensive, the decision-making procedures are too protracted and finding commercial banks prepared to bear the remaining residual risk of 10% remains difficult.

Moreover, Asian countries in particular are focusing on continuing to expand their shipyard capacities as well as supporting their yards with massive assistance programmes, the latest example being South Korea, where the government has reportedly provided ?7 billion to help out with loans and down payment guarantees. The Chinese government is also investing similar sums to assist its shipyards.

In view of the currently low international willingness to cooperate, the German shipbuilding industry ? in close coordination with European shipbuilding countries ? must develop its own strategies for overcoming the crisis.

?The main task now is generating new orders. In view of the high technical expertise of our industry, we see great opportunities in the construction of environment-friendly ships that are highly efficient in terms of energy consumption,? explained Lüken.

Shipyards have already successfully diversified and switched their product range largely to high-tech vessel types. The share of containerships of the value of deliveries declined in 2008 from about 42% to approx. 16% of orders on hand. Cruise ships and ferries, yachts and special-purpose vessels for offshore technology meanwhile account for two-thirds of future production.

This news is a total 2075 time has been read