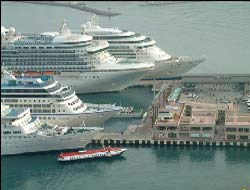 Ege Ports invested $20 million in Ku?adas? Port to date, said Gregory M. Kiez chairman of the board of Ege Ports. The company hosted the biggest cruise ship ever to come to Turkey.

Ege Ports announced plans to construct a third port in Ku?adas? for $10 million

Ege Ports invested $20 million in Ku?adas? Port to date, said Gregory M. Kiez chairman of the board of Ege Ports. The company hosted the biggest cruise ship ever to come to Turkey.

The newest member of the American Cruises company Emerald Princess anchored in the Ku?adas? Port (Ege Port) with 3 thousand passangers aboard yesterday. There to welcome the Emerald Princess, the biggest cruise ship ever to visit Turkey, was the Culture and Tourism Minister Atilla Koç, Ege Ports Chairman of the Board Gregory M. Kiez and General Manager Aziz Güngör. The dance group Anadolu Ate?i performed a show for the 3,000 distinguished guests as the ship arrived.

In his speech during the welcoming ceremony, Gregory M. Kiez said that they had invested $20 million dollars in Ege Ports, and that the Emerald Princess including Ku?adas? Port in her first voyage showed the support of Princess Cruises of Turkey and Ege Ports.

Kiez says that they started to earn back on their investment, made in 2003, and that Ege Ports has become an important port for cruise ships.

He also said that they expect 32 new ships to start cruises within the next three years. “$20 million have been invested in Ege Ports so far but, based on a need for a third wharf, we will invest another $10 million,”said Kiez. Ku?adas? Port can harbour nine ships at a time and that it is built on 260 square meters, which they plan to enlarge by 100 square meters, he said. He said that Ege Ports is a model for all other Turkish ports because it owns the ISPS Code (an international security code), which is unique in Turkey. They secured routine voyages of world's first class cruise ships by offering international standards in their port, he said.‘We might go public in the future'

Royal Carabbian Cruises, the second largest cruise company, owns 27.5 percent of the shares of Ege Ports. The remaining shares belong to Global Yat?r?m Holding (‘Global Investment Company'). All shares of Royal Carabbian Cruises are quoted on the New York Stock Exchange and 4.5 percent thereof belongs to the Ofer family. The majority interest of the company belongs to a Swedish family by the name of Fleming.

This news is a total 1479 time has been read