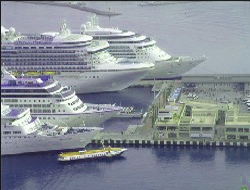 "Ege Ports" of Kusadasi coastal town of Aegean province of Aydin will open this year's tourism season with the arrival of Greek flagged cruiser ship "Aqua Marine" on Sunday.

Aziz Gungor, DG of Kusadasi Aegean Port Management Corp. (Ege Ports), said Saturday that the ship which had a capacity of 1,000 passengers would anchor at Kusadasi Port every week starting from tomorrow.

He said a total of 17 cruise ships will bring tourists to the town in March.

Gungor added that they expected nearly 700,000 tourists to arrive at Kusadasi Port with 700 cruiser ships in 2008.

This news is a total 6140 time has been read