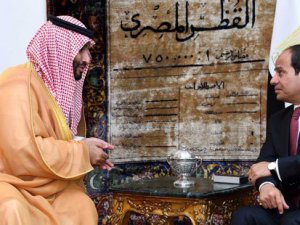 Egypt and Saudi Arabia agreed to establish their maritime boundaries in the Red Sea, Egypt’s presidency said in a statement Thursday.

Egypt is one of nine member states that participated, via air and naval forces and in the Saudi-led military coalition in Yemen against the Iran-backed Houthis, who have controlled northern parts of the country since January.

Egypt has announced that it will not “tolerate” the closure of Red Sea’s Bab al-Mandeb Strait by the Houthis.  AP reported Feb. 23 that “Egypt has set up a special rapid deployment force” to take military action and intervene if the Houthis threatened maritime navigation through the strait.

The one-day visit comes a week after Egypt’s Foreign Minister Sameh Shoukry had visited Jeddah where he and his Saudi counterpart Adel al-Jubeir assured mutual support to the legitimacy of the Yemeni government.