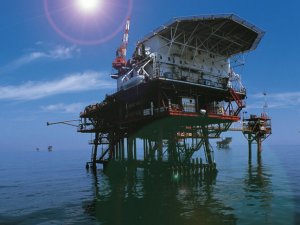 Gas from the Mediterranean’s largest offshore field is pumped to a facility in Port Said city, to be prepared for delivery to the national distribution network, with initial production of 350 million cubic feet per day, oil minister Tarek El-Molla said in a statement Saturday. Daily output is set to rise to about 1 billion cubic feet in June and 2.7 billion by the end of 2019, he said.

Production from Zohr will help the most populous Arab nation achieve “self-sufficiency of natural gas, ease the burden on the state budget and cut the imports bill,” El-Molla said.

Zohr could put an end to the tenders that suppliers from Glencore Plc to Trafigura PTE Ltd. have won in past years. The field also will help ease pressure on Egypt’s economy, which has been plagued by a shortage of foreign currency since a 2011 uprising. Egypt now imports liquefied gas at high costs to meet its energy needs. However, Eni’s discovery of Zohr in August 2015 promises to satisfy much of the local demand and could restore the nation as a gas supplier for the eastern Mediterranean region.

“One of the biggest issues Egypt had over the past years was the big shift in its energy balance from a net exporter to a net importer because of an increase in consumption versus a decline in production,” said Mohamed Abu Basha, Cairo-based economist at investment bank EFG-Hermes. “With the new gas finds, it’s returning to this balance, if not exporting, then at least there’s no deficit.”

The North African nation had to give up gas exports in 2014 to meet local demand and because sporadic sabotage on its main pipeline in the Sinai Desert throttled shipments. Zohr, with an estimated reserve of about 850 billion cubic meters of natural gas in place, is expected to close the gap between supply and demand, helping to end Egypt’s reliance on imported LNG next year and may eventually enable a return to exports, El-Molla said last month in an interview.